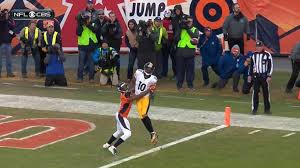 The NFL is reportedly looking at implementing a number of rule changes, some expected (clarifying the catch rule) and some not so.

One of the surprising proposals offered by the NFL Competition Committee is to change the penalty for defensive pass interference from a spot foul to a 15-yard penalty at most which would make it  more in line with how the game is refereed on the collegiate level.

Changing the pass interference penalty is on its face a defense-first measure. Offenses would have far less to gain by "chucking it up" to try and draw a penalty from a grabby defensive back downfield.

Defensive pass interference was called 266 times in 2017, per Pro Football Reference, or more than once per game for an average of 18.09 yards per game. It was the third-most frequent flag behind offensive holding and false start.

In addition, and perhaps as a counter-measure, the league is expected to increase "illegal contact" calls as an effort to limit the amount of hand-fighting.

The committee is also looking at potentially eliminating the "going to the ground" portion of the catch rule in attempt to clarify, changing the targeting rule and emphasizing more ejections for fighting.

"We are going to figure it out," said Stephen Jones, Cowboys executive vice president and competition committee member, in regard to the catch rule. "I do think we'll make some improvements that our fans, and in general, people will appreciate when it's all said and done."

The NFL Competition Committee is made up of two owners, club presidents, general managers and head coaches. The Committee must present proposed measures to the 32 owners to be accepted. A new rule or a revision must have the support of 75 percent of the owners.


I would fully endorse this and call for the CFL to do the same.


This would stop QB's from chucking it downfield hoping to get a call and 30-40 yds of field position. I'm all for it. Wonder if the CFL should look at this as well.

The CFL should go with it. This 'Hail Mary and hope for a penalty' has become a designed play.