--I've stated it before, and I will state it again.  I have very little interest in the Olympics.  With most of the daily activity happening while I'm asleep, the allure is not there.  However, when the events are live as they were with men's slopestyle on Friday and Saturday night, I will watch. Although I did need my 14 year old daughter to tell me Mark McMorris was competing.   Like many Canadians, I checked out what was going on with the Regina snowboarder and others on Friday and Saturday night.  What I saw was more than just a Canadian or a Saskatchewan athlete winning a medal. What I saw was truly amazing.

The McMorris story is well known.  11 months ago, his body was in a heap after a terrible accident---one that was shown on the documentary I referred to in Friday's column.  He was lying in a hospital bed with tubes coming out of his body.  He was an absolute wreck.  He was also not going to let an opportunity to A) be in Pyongchang and B) get a medal go out the window.  He was determined to be there and he was.  For a while, it looked like that medal might be gold, but it wasn't to happen.

McMorris attacked the hill as he did before suffering an injury which would have shut down many for good. He wasn't going to use what happened as an excuse.  He was just going to go out and do the best he could which he did.  If he didn't fall at the end of his last run, one can only wonder if that bronze would have been gold.  One might come before Pyongchang is over and whether or not it does, it can not take away the fact that this province and this country should be damn proud of this kid for.

By the way,   I love the lingo from the announcers.  Can we get hockey and football guys to steal some lines?  Phil Andrews, what will the "nar factor" be like at the Brandt Centre for the Memorial Cup? Will Luc Mullinder look at Rod Pedersen after a long Naaman Roosevelt TD and go "HOLY KITTENS !!" Imagine Chris Cuthbert saying Collaros brought "the spaghetti" on that TD toss to Naaman Roosevelt.

--If Randy Ambrosie didn't know about the love Rider Nation had for the CFL, (which I think he does) he does now.  Randy's Road Trip Regina stop was an overwhelming success. 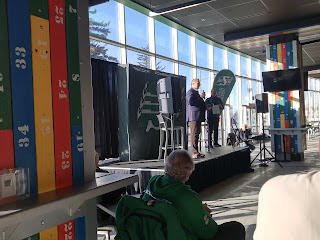 Ambrosie talked about his vision for the league and really didn't hide from any questions fans had about the state of the league and how to make it better. He let the crowd know the quest  to build a bigger stronger CFL is underway and that the input of  fans is needed to help achieve growth and success league wants. Not everything the fans want will happen, but Ambrosie made it clear that their voice does matter.  We will probably see that with the schedule, but I got the idea in comments he made that convincing TSN to do this won't be an easy sell.  He also mentioned how fans in Eastern Canada would like to see the Grey Cup start earlier in the day.  While that wouldn't be the worst thing in the world, it would be interesting to see how the network responds to that seeing the game is in prime-time.  I'm OK with the Grey Cup staying at the same time when it comes to kickoff, and I'm also OK as you know with the Grey Cup being played on the last Sunday of November.


--It looks like it is gearing up to be another wild year in the CFL West.   Say what you will, but the fact the Stampeders have told Jerome Messam to go to free agency while releasing Marquay McDaniel and trading Charleston Hughes is a sign that the days of dominance the white horse has had could very well be coming to an end.

The Eskimos are a team in transition as well, while the Riders have considerably improved a lineup that was a few seconds away from being in the Grey Cup.  Winnipeg joined the party on Friday by signing Adarius Bowman.  Adding him to the likes of Dressler, Adams, Denmark and Harris gives Winnipeg a very good offence.  If they can add a couple of pieces on defense, they will be in the equation as they were last year.    Where does this leave BC?  It looks as if they are going to let a lot of players go to free agency.

--Did Nick Kypreos go outside Saturday night without a helmet on?  After another Oilers loss, which should end any talk of this team making a late playoff run, Kypreos came on and said the team should look at trading Leon Draisiatl.  ??????  I actually had to rewind the PVR to see if I had heard Kypreos right.  Elliotte Friedman was quick to disagree with Kypreos as I'm sure many did.  Trading Draisiatl is laughable.

He has had an off-season, but after an early-season concussion that hampered him he has 48 points in 50 games.  Compare that to Auston Matthews  who has 44 points in 47 games.  Is Kypreos of the belief Toronto should trade Matthews?  Are trades needed in Edmonton? Absolutely.  It's no secret I am not and haven't been a fan of Cam Talbot.  I think he was highly over-rated going into this season and it is no secret that he has been a disaster as he is near the bottom in goals against average and save percentage.  Teams out there with unproven backups like Tampa, Toronto and Pittsburgh could use a guy like Talbot, but what would it cost and could they afford it?  A reset is needed.  Peter Chiarelli failed miserably in the off-season. He can start making up for it now or else he may not get the chance.  One has to think Bob Nicholson is silently seething knowing he has Connor McDavid and that the team has regressed this year with him in the lineup instead of progressing.

--Yu Darvish to the Cubs? Yeah, OK.  Can they find a way to bring Jake Arrieta back now?


Those snowboarders don't have it all upstairs, but they are entertaining to watch.

If Chiarelli were to trade LD, it would be his last move as Oilers GM. Kypreos is an idiot. His brain got real soft after getting punched in the head so much.

If Bob Nicholson wants to improve the Oilers the first thing he has to do is get rid of the Craig MacTavish/Kevin Lowe stench. They're both still on the payroll and their influence is killing the franchise. What other NHL team would think of Oscar Klefbomb as their stud defenseman or that Milan Lucic is the key to winning the cup?


Hearing Roddy throw some snowboarder lingo in a Rider broadcast would re-define awesome!


Calgary is definitely taking a step backwards for the first time in a long time. Good to see!