On the heels of a campaign that saw the largest year-to-year scoring increase in more than three decades and another record-tying seven-team playoff turnover, the 2018-19 NHL season begins Wednesday in four cities: Toronto, Washington, Vancouver and San Jose.

* In Washington, the Capitals will raise their first-ever Cup banner to the rafters of Capital One Arena before hosting the Bruins, a contest that comes 119 days after the Capitals defeated the expansion Golden Knights 4-3 in Game 5 of the Stanley Cup Final. Defending Stanley Cup champions own an all-time record of 57-25-15 in season openers, including only three wins over the past 10 seasons: Pittsburgh won in 2009-10 and 2016-17, and Chicago won in 2013-14.

* In Vancouver, the Flames and Canucks renew their rivalry in their first matchup since Dec. 17, 2017, and first in more than 18 years without either Daniel or Henrik Sedin. Wednesday will mark the first time in the 21st century that the Canucks will play a game against any opponent without either Sedin in the lineup – a span of 6,752 days and 1,465 team games (1,360 regular season and 105 playoffs). A season-ending 5-2 victory in San Jose on April 9, 2000 was the last such occurrence.

Highlights from 100 years of NHL season openers are noted below. A detailed overview – with stats for teams, players, head coaches and League records – is available at this link.

* Aside from the Golden Knights, who defeated the Stars 2-1 in their inaugural game in 2017-18, the Lightning (.680) hold the best point percentage in season-openers in League history.


* The Wild visit the Avalanche on Thursday before hosting the Golden Knights on Saturday. Minnesota (.853; 13-1-3 in 17 GP) and Colorado (.737; 26-8-4 in 38 GP) rank first and second in League history, respectively, for point percentage in home openers (excluding Vegas).


* The NHL record for fastest goal from the start of a season opener is 0:10, scored by Minnesota North Stars forward Kent Nilsson on Oct. 11, 1986 against the Quebec Nordiques.


* The NHL record for goals by one player in a season opener is five, achieved twice in 1917-18 (Harry Hyland and Joe Malone) and once in 1922-23 (Babe Dye). The modern-era record is four, last achieved by Maple Leafs forward Auston Matthews in his League debut on Oct. 12, 2016 against the Senators.


* Ten active NHL players have scored a hat trick in a season opener, including four who did so in 2017-18: Connor McDavid, Wayne Simmonds, Brandon Saad and Alex Ovechkin.


* The NHL record for assists in a season opener is five, set by Devils forward Greg Adams on Oct. 10, 1985 against the Flyers and matched by Penguins forward John Cullen on Oct. 5, 1990 against the Capitals. 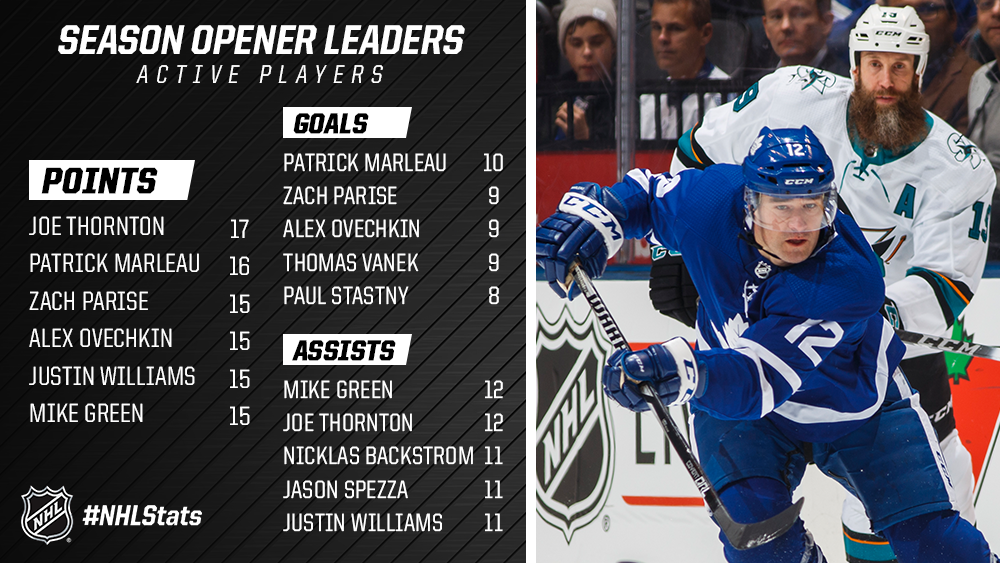 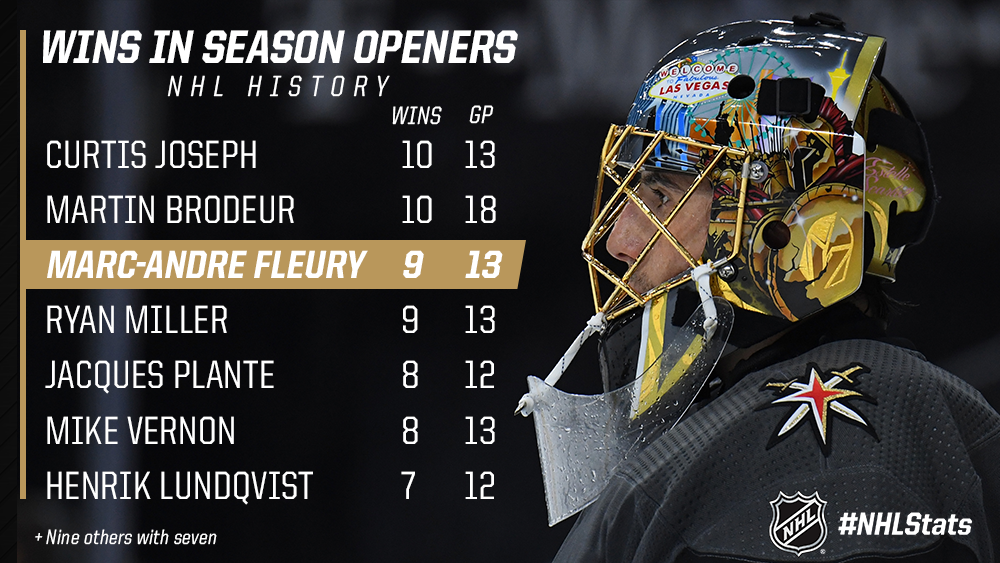 * Edmonton’s Connor McDavid aims to become the sixth player in NHL history to win at least three consecutive Art Ross Trophies; only Wayne Gretzky (7), Gordie Howe (4), Phil Esposito (4), Jaromir Jagr (4) and Guy Lafleur (3) have done so. McDavid (87-169—256 in 209 GP) is within reach of hitting 300 career points before his 22nd birthday (Jan. 13, 2019), a feat achieved by only eight players in League history – Sidney Crosby is the only player to do so in McDavid’s lifetime.

* Toronto’s Auston Matthews and Winnipeg’s Patrik Laine, the top two picks in the 2016 NHL Draft, respectively, each set out for a third straight 30-goal season. Since the 1980s, only four players have started their NHL careers with at least three consecutive 30-goal campaigns: Pavel Bure (3), Evgeni Malkin (3), Sergei Fedorov (4) and Alex Ovechkin (13).

* Reigning Calder Trophy winner Mathew Barzal enters 2018-19 after posting 22-63—85 last season (82 GP) to finish 14th in NHL scoring and with 20 points more than the next-closest rookie. The Islanders forward became the eighth rookie in League history to record 60 assists in one season; only two of the previous seven hit the mark again as a sophomore: Peter Stastny (93 in 1981-82) and Sidney Crosby (84 in 2006-07).

* Montreal’s Jesperi Kotkaniemi (No. 3) will become the second-youngest skater to play in an NHL game for the club (18 years, 89 days on Oct. 3; tied with Claude Lemieux), less than three weeks older than Mario Tremblay (18 years, 73 days) was for his debut on Nov. 14, 1974. Tremblay scored twice in his second career game two nights later.

* Washington’s Alex Ovechkin needs 78 points for 1,200 in his career (607-515—1,122 in 1,003 GP) and has scored at least 30 goals in each of his 13 NHL campaigns. The Capitals captain aims to become just the third player in League history to score 30+ goals in 14 consecutive seasons. The reigning Maurice “Rocket” Richard Trophy winner has led the League in goals seven times, tied with Bobby Hull for the most in NHL history.

* Florida’s Roberto Luongo (471) sits 14 wins shy of passing Ed Belfour (484) for third place on the NHL’s all-time wins list and 29 victories from joining Patrick Roy (551) and Martin Brodeur (691) as the only goaltenders with 500+ wins. Entering his 19th NHL season, Luongo also needs one shutout to pass Tony Esposito (76) and Belfour (76) for sole possession of ninth place and 29 games to pass Roy (1,029 GP) for second place on the all-time games played list among goaltenders, behind Brodeur (1,266 GP).

* Joining Thornton for a 21st NHL season are Patrick Marleau (TOR), Matt Cullen (PIT) and Zdeno Chara (BOS). Cullen, the oldest active NHL player, will celebrate his 42nd birthday on Nov. 2 and needs only 55 games for 1,500 in his career.

NHL VETERANS SET FOR NEXT CHAPTER WITH NEW CLUBS

* With the addition of Erik Karlsson, the Sharks are set to become the ninth team in NHL history to have multiple Norris Trophy-winning defensemen in their lineup for a game. Karlsson, a four-time finalist and two-time Norris Trophy winner (2011-12 and 2014-15), and Brent Burns, a two-time finalist and winner in 2016-17, have combined for 308-776—1,084 in their careers.

* After playing five seasons in the KHL, Ilya Kovalchuk returns to the NHL as a member of the Kings. The 35-year-old has 417-399—816 in 816 career NHL games, the eighth-most points by a Russian player in League history. Kovalchuk ranks eighth on the NHL’s all-time regular-season overtime goals list with 14.

* Former Canadiens captain Max Pacioretty and former Jets forward Paul Stastny are among the newest members of the Golden Knights for their sophomore season. Pacioretty has 45 career game-winning goals, including 38 since the start of 2013-14 – second in that span behind Alex Ovechkin (43).

* Ryan O’Reilly, a 20-goal scorer in four of the past five seasons, joins the Blues along with St. Louis native Pat Maroon. Maroon will become the third Missouri-born player ever to suit up for the Blues, joining forward Cam Janssen (165 GP) and defenseman Chris Butler (45 GP).

A quartet of season-opening hat tricks in 2017-18 – four of 81 on the season – foreshadowed what would become the highest-scoring NHL campaign in more than a decade, with an average of 5.9 goals per game. Quick hits from 2017-18:

* Giroux hit the 100-point mark for the first time thanks to a 44-point improvement over 2016-17, making him one of 21 players to boost his point total by 25 or more compared to the previous season.

* The seven-team playoff turnover matched the largest year-to-year change in NHL history. It marked the second straight campaign and third time in four seasons that seven new teams reached the postseason. Overall, there has been playoff turnover of at least five clubs in 11 of the past 13 seasons.

* For only the fourth time since the conference format was introduced in 1974-75 – and second straight campaign – the last-place team from each conference reached the playoffs the following season, with both the Avalanche and Devils making the leap from 2016-17. The other instances: Red Wings/Rockies (last in 1976-77), Bruins/Sharks (last in 1996-97) and Maple Leafs/Oilers (last in 2015-16).