NHL Three Stars Of The Week 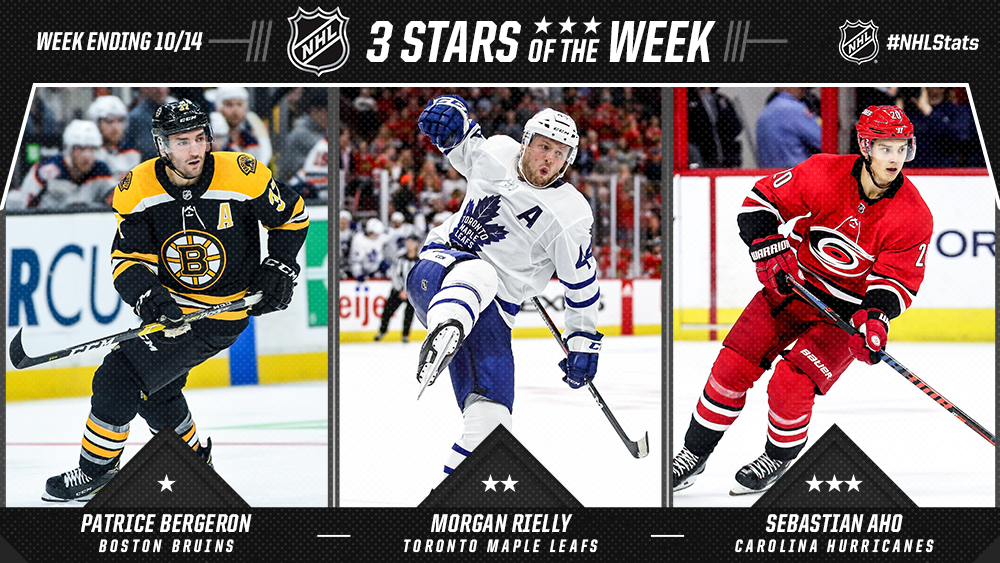 Bergeron led the NHL with 4-5—9 in three games as the Bruins (4-1-0, 8 points) registered a perfect week to extend their winning streak to four contests. He collected 3‑1—4, including his fourth career hat trick and the decisive goal, in 6-3 triumph over the Ottawa Senators Oct. 8. In doing so, Bergeron became the fifth player in Bruins history – and first since 1995-96 (Cam Neely) – to record a hat trick in the team’s home opener. He added 1-1—2 in a 4-1 win against the Edmonton Oilers Oct. 11 before closing the week with 0-3—3, his ninth career three-assist performance, in an 8-2 victory over the Detroit Red Wings Oct. 13. The 33-year-old Ancienne-Lorette, Que., native – who sits six goals shy of the 300-goal milestone (294-451—745 in 968 GP) – paces Boston and ranks third in the NHL with 5-6—11 in five appearances this season.

Rielly posted a League-leading six assists and ranked fourth overall with 1-6—7 in three outings to help the Maple Leafs (5-1-0, 10 points) also extend their winning streak to four games. He established a career high with four helpers in a 7-4 victory against the Dallas Stars Oct. 9. Rielly then collected 1-1—2 in a 5-3 triumph over the Detroit Red Wings Oct. 11 and one assist in a 4-2 win against the Washington Capitals Oct. 13. The 24-year-old Vancouver native, who has notched at least one point in each of his six appearances this season, ranks second in the NHL with 3-10—13 overall. Only two other defensemen in League history have recorded as many points through their team’s opening six games: Toronto’s Harry Cameron in 1917-18 (9-6—15) and Vancouver’s Paul Reinhart in 1989-90 (5-9—14).

Aho also extended his season-opening point streak to six games, placing third in the NHL with 3-4—7 in three contests as the Hurricanes (4-1-1, 9 points) picked up a pair of wins. He collected 1-1—2 in a 5-3 victory over the Vancouver Canucks Oct. 9. Aho then matched a career high with 2-2—4, highlighted by his second career overtime goal, in a 5-4 triumph against the Minnesota Wild Oct. 13. He closed the week with one assist in a 3-1 loss to the Winnipeg Jets Oct. 14. The 21-year-old Rauma, Finland, native – who became the sixth player in Hurricanes/Whalers history to post a season-opening point streak of at least six games – sits fourth in League scoring with 4-7—11 overall.
at 10/15/2018