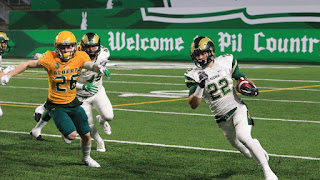 --With Noah Picton on the sidelines due to injury, Seb Britton got the start at quarterback for the Regina Rams in a must-win game and he came through..  Britton threw for 273 yards and two touchdowns as Regina beat Alberta 32-17.  It was the first game for the team since having their three wins taken away from them because of an ineligible player.

--Jeremiah Masoli threw four touchdown passes---three to Luke Tasker as the Ti-Cats beat Toronto 34-20. Hamilton and Ottawa are now tied for first in the East.  The Ti-Cats are 8-7 while Ottawa is 8-6 and in Edmonton Saturday.

--Caleb Holley returns to the Riders lineup Saturday in Winnipeg.   He takes the spot of Jordan Williams-Lambert on the roster.  Mich'ael Brooks also returns to the lineup and will suit up at defensive tackle for the green-and-white.  Game time is noon on 620 CKRM with the pre-game show starting at 9

--The Pats took a 3-0 lead in Cranbrook and held on to beat the Kootenay Ice 3-2 for their 2nd win of the season.  Regina will conclude a three-game road trip through the Central Division on Sunday.

--Milwaukee made it 12 straight wins with a 6-5 win over the Dodgers in Game 1 of the NLCS.  Game 2 is Saturdayafternoon in Milwaukee.  The ALCS starts in Boston Saturday night as the Red Sox entertain Houston.
at 10/13/2018