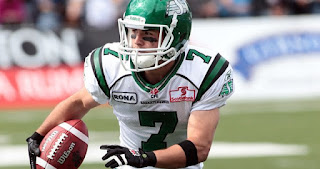 The Saskatchewan Roughriders are pleased to announce that receiver Weston Dressler has been named to the Canadian Football League’s 2012 all-star team.

Dressler was chosen as a CFL all-star by a voting panel that included fans, members of the Football Reporters of Canada (FRC) and CFL head coaches.

This marks the first time in Dressler’s career that he has been named a CFL all-star while being named a West Division All-Star three times.


Weston Dressler (SB) - Dressler just completed his fifth season with the Riders and it marked the fourth time he accumulated over 1,000 yards receiving since joining the team. He finished the regular season with 94 catches for 1,206 yards and 13 touchdowns, all career highs. He also added 11 carries for 56 yards and 20 punt returns for 229 yards, including a 76 yard return for a touchdown.

Congratulations Weston! There's no doubt you are the only Roughrider that deserved this honour. I really do hope you play your whole career here and I hope it a lenghty one. With that said, I wouldn't blame you for wanting to be traded to a team that actually strives to win instead of hoping to be competitive.

Go crawl back in your hole Badger!