Pats Do It Right On Eberle's Night 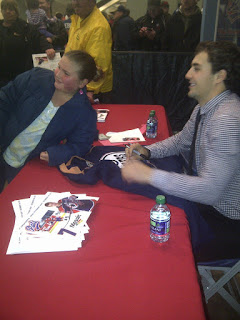 I don't know how many autographs Jordan Eberle signed Wednesday night at the Brandt Centre, but if he tells the Edmonton Oilers that he has suffered some kind of wrist injury, I will know why.  The Regina Pats once again hit one out of the ballpark when it comes to honoring one of their own as the half hour ceremony for Jordan Eberle was fantastic.
As expected, there was a thunderous standing ovation for the Regina product who with family on hand proudly raised a banner with his likeness and the number 7 high above centre ice where it will join the likes of other Pats greats like Dale Derkatch, Doug Wickenheiser and Mike Sillinger.
﻿ 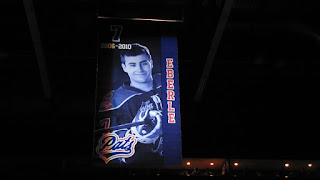 The crowd  heard from many including Derkatch, Sillinger, Colten Teubert, Brandon Davidson and Kevin Lowe and of course from the man himself. 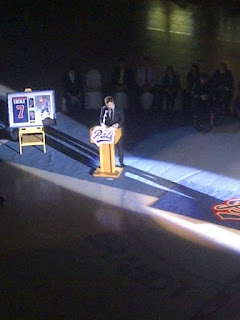 Eberle pointed to the section where he first started watching Pats games and then proceeded to thank the organization and the fans for the support he has been given. He also told everyone that hard work can get you anywhere you want. He also said that its his hope that he will back on the ice with the Edmonton Oilers very soon. Eberle has been playing with Oklahoma City in the American Hockey League with the NHL lockout on.
While the Pats could not finish the night with a victory losing 5-1 to the Red Deer Rebels, I don't think many cared. For that matter, I don't know how many actually watched the game as many were lined up to get Jordan's autograph on something. At one point, the line stretched from one end of the ice almost to the other down the south concourse.
Give a lot of credit to Brent and Russ Parker along with Cliff Mapes and the rest of the Pats department for giving a first class individual a first class night in his honour.
﻿
at 12/05/2012

Too bad for Jordan that he has had to play with such awful teams so far in the Pats and Oilers. Once he is a free agent I would think he will change that.

Great night for a great kid indeed. It says a lot when someone who has just basically gotten out of junior gets his # retired. He was a little awestruck by everything, but that's OK.

Go crawl back into your hole!

Go crawl back into your hole!