Just under two weeks until Christmas. If the damn Mayans aren't correct with their prediction, I'm going to have to do some quick shopping.

--I realize the WHL will have five players on the Canadian junior team, but I can't help but think the league got the short end of the stick with the cuts. Matt Dumba, Hunter Shinkaruk, Mark McNeill, Derrick Pouliot and Laurent Brossoit all got cut. Yeah, I'm a little biased being in the West, but I thought Pouliot and Brossoit would make the roster.

--Its nice to see some Regina flavour on the team as Kamloops Blazer and Regina native J.C Lipon cracked the final roster. Hopefully he can have some gold around his neck like fellow Reginans Ryan Getzlaf and Jordan Eberle in recent memory.

--I think its the fact that the games will be on early in the morning when I am sleeping, but I'm just not that excited for the World Juniors this year. Perhaps it has something to do with the lockout. All I know is I'm not getting up early and when I hear the score, I don't know how excited I'll be to watch the game win or lose.

--It was good to see the Pats come through with a solid 3-0 win on Thursday night. The team has been taking a lot of flak from people for their recent play. Some of it has been deserved while some of it has gone a little too far.  Give GM Chad Lang credit as he is not just sitting back waiting for bodies to return. He has gone out and gotten some guys to make this team competitive and it worked Thursday. It would be nice to see the team get a couple of points on this Alberta road swing before Christmas.

--Josh Hamilton, Albert Pujols and Mike Trout are all in the L-A Angels lineup.  That's a nice 3-4-5 they've got. Do they have the pitching now?

--If you've been listening to the mighty 620 CKRM this week, you know that I've been doing the afternoon news. Its been a long time since I read a newscast, but it hasn't been that bad. I've had a lot of positive feedback from people so thanks a bunch!

--If you heard "Sportscage" on Wednesday, you heard me get into an "altercation" with High Impact Wrestler Brett Evans. Lets just say things got a little out of control and while I thought Pedersen had my back I was wrong as he was cowering in the corner. At least Locker Talk co-host Pete Paczko was willing to stand up to the thugs when they got in our mugs on the season-ending show last  year.  By the way, the year-end card goes at the Victoria Club tonight starting at 8. Black tie is optional!

--Here's a question for you. Who is the top amateur athlete in Regina in 2012?  I don't want a professional (ie: Riders). My vote would go to U of R cross country runner Kelly Wiebe. Is there anyone else out there that you can think of besides perhaps Marc Mueller. If so, lemme know.

--Sportsnet is running an ad for the Grand Slam of Curling saying curlers are chasing the most prestigious trophy in the sport. Ummmmmmmmmmmm, I think that honour would go to the Tankard that is won at the Brier. Nice try there Sportsnet.

--I really should have gone to Toronto to watch the Seahawks maul the Bills on Sunday.

--You only have a few more days to vote Seahawks punter and Regina native Jon Ryan to the probowl. Do so by clicking right here.

--Sunday is going to be one of those days to root yourself to the couch and watch some great football games. This will be a great weekend of NFL football with lots of outstanding games to be played.

--It literally amazes me that Gary Bettman has been the NHL commissioner for 20 years when you see what type of damage has been done to the sport. I'm not saying Bettman is to blame for all of that, but the man's legacy will be three work stoppages and perhaps two seasons not being played under his watch. BRAVO!!!

--UFC fighter Mark Hominick retired this past week. Hominick will best be remembered by this blogger for the way his noggin looked after a UFC card in Toronto. Remember this??!! 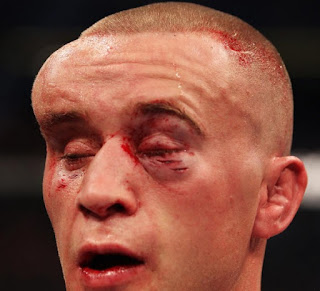 ﻿
That was just plain nasty!!!

--I have no problem with Anthony Calvillo returning. The guy is a treat to watch and we will be able to do it for at least one more year if not two.

--I can't see Adrian McPherson staying in Montreal as a backup. Do the Bombers or Eskimos want to take a chance on him as a starter? Could he be Ottawa's guy? I guess we have to wait for a while for the last scenario I painted to happen.

--When did it become the thing to do to bash someone after he had been let go.  I thought it was classless of Kavis Reed to throw Eric Tillman under the bus after he had been let go considering it was Tillman that gave Reed his chance and now it was Ed Hervey taking shots at Tillman.  Was Eric really that much of a disruption in Edmonton? He hasn't had that problem in other stops has he? I do find it interesting though that the usually never-shy to speak Tillman has not made any comments since his departure.

--There is a lot of talk that Kent Austin will be named coach and GM of the Tiger-Cats within days. I still won't believe it until I see it.

--Two thumbs up to Premier Brad Wall for his Christmas message that went on "This Hour has 22 Minutes". If you missed it, here it is....

--Some knob in Saskatoon is upset with Saskatoon Transit because a sign of "Merry Christmas" is on the buses. He wants Saskatoon Transit to remove the sign and apologize or he will take his complaint to the Saskatchewan Human Rights Commission. Really??! To make matters worse, apparently Saskatoon Transit has bowed to this guy's wish. Methinks that Saskatoon bus driver that got in trouble lately for an incident with a pedestrian should step in here and fix that mess.

--Have a great weekend! There's only two Saturdays of Christmas shopping left so be nice to one another---especially when looking for that parking spot in the mall.

Lipon is quite the story. Good on him for making the Jr team.

Reason #26876 as to why Brad Wall is Canada's most popular premier. Well done!

As long as Kavis is employed by the Eskimos, the Riders are in good shape.

Tillman was very much a disruption to the Eskimo organization. Simply reading Terry Jones in the Edmonton Sun illustrates this. It was one thing for Tillman to give Reed his coaching opportunity but Tillman then left him hanging by trading away a franchise QB for nothing in return (against Reed's advice). Tillman also expected Reed to do many of the management duties while Tillman remained in Regina. This is strange why Tillman was this way in Edmonton and not other teams. But I believe Reed has been very polite in his comments about his past boss.

As far as Regina's athlete of the year, all mentioned are great athletes and certainly deserve accolades. Add to that someone who seeems to fly under the radar, Mark McMorris. He just won 2 gold medals in Breckenridge at the Dew Tour this weekend. In 2012, 2 X games golds, 1 Silver at the Euro X games....all against the world's best boarders.