Back in April, we got a cat. She's only a year old. She may not make it until Christmas. The tree went up at Casa De Blair on Sunday and well, lets just say kitty thinks its a toy... 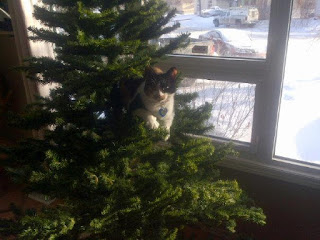 There's no way that tree is staying upright until Christmas. No way whatsoever!

What has happened to the Regina Pats? The wheels have come off and then some. I didn't go to Sunday's game at the Brandt Centre. I'm glad I didn't. One night after beating the Pats at home by a score of 9-0, the Saskatoon Blades walked into Regina and handed the Pats a 7-0 thumping. The shots on goal were once again very one sided. This team was looking good when it came home from the west coast trip and then its gone south and gone south in a big hurry. At some point, you would think some pride would have to come through but it appears as if it isn't. Pat Conacher definitely has his work cut out for a squad who I think is just trying to survive until the Christmas break. I don't know if its ever been uglier for the team.

The Seattle Seahawks absolutely clobbered the Arizona Cardinals 58-0 on Sunday afternoon. It almost had this Seahawks fan feeling sorry for the Cardinals---especially when Seahawks coach Pete Carroll threw for the endzone on a 4th and 21 late in the game when it was well in hand. I'm not sure what Carroll was trying to prove and I'm not sure I approve of his tactics. It was a little on the bush side.

I have said it once in this space and I will say it again. Adrian Peterson is the NFL MVP this year. Yes, Peyton Manning and J-J Watt and Andrew Luck have had their moments, but none have shone as much as Peterson who has almost single-handedly put the Vikings in position to be in the playoffs with a strong finish to the season.

Cam Newton's act has worn thin with me. The guy pouts when they lose, but when they win, he carries on with his Superman pose. Look at your record Cam. You have no right to do the Superman pose.

Christmas shopping would be fine if some Regina retailers would actually carry some of the items I am looking for (stuff for the munchkin). I don't necessarily want to shop on-line, but I have no choice.

TSN can tell me to wake up for games at the World Juniors, but sorry, I just don't see it happening.

-----
A Toronto mall santa got fired for telling a kid the Leafs suck. Isn't Santa allowed to have an opinion. He wasn't lying!
----

If they are starting the process to name the team, when will Ottawa's CFL finally get around to doing that? Have they said?

Alexander Gustaffson of Sweden beat Mauricio "Shogun" Rua in the UFC on FOX card Saturday night in Seattle. Tough Swedes in the Pacific Northwest....I wonder if the Sedins were watching.

------
Finally, I wasn't going to mention this until the Friday update, but Rod Pedersen spilled the beans (unintentionally) so here goes. As of today, I am back in radio for a short-term basis. I am going to be reading the afternoon news and sports on 620 CKRM for a few weeks after the uber-talented Kali Bourhis decided to call it a career. I will be doing it for the month of December and if all goes well, I'll be the new kid on the block on a permanent basis. I am looking forward to it. I didn't know what to expect when I walked into that building for the first time to help Rod out with "Sportscage", but there are many great people working for Harvard who made me feel comfortable right from day one so here's hoping this is more of a long-term project than a short term one. It probably means my appearances on "Sportscage" will be much more limited or eliminated altogether seeing I'll be a little busy when the show is on, but I'm sure I'll be popping in from time to time. I'd tell you to listen in, but the last ratings book suggests a majority of people are already.

Quite the Sunday in sports. Wouldn't have expected the spankings that took place in the Queen City, Seattle,& the Meadowlands. That's why the game is played.

I went to the Pats game yesterday with the kids and I just feel sorry for them. Their best players are hurt and its like men playing against boys. Once they get healthy, they will be fine, but when does that happen!

Congrats on the new assignment. You certainly are with the #1 radio group in town now.

The Seahawks (Pete Caroll) went over the line yesterday. There is beating a team and then there is embarassing a team. Sorry Mitch, but that's the way I and a think of lot others feel.

Went to my first Pats game in two years on Wednesday when Ebs number was retired. I left with 10 mins to go. I don't know when I'll be back now. SAD!

So you are telling me that because the Seahawks were POUNDING the Cards that they shouldn't play to the final whistle. The Cardinal's players are being PAID Thousands of dollars to stop them from scoring. I am sorry, but these aren't kids playing for participation. They are professionals being paid a ton of money. SUCK IT UP!!! Go HAWKS. Mike Hammer

Break a leg on the new gig,
---warm up the pipes reading the training camp roster for the Slovakians, the Czech republic or the IKEA cataloge.

When Cam Newton scores 37.08 Fantasy points for me in the Riderville Fantasy Football league...he can do whatever the hell he wants to do!!!