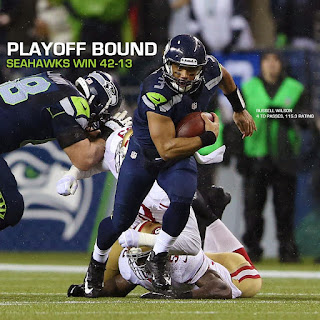 Playoff bound indeed!! I'm not going to lie to you. Russell Wilson is approaching god-like status right now. If the Seattle Seahawks aren't the best team in the NFL right now after what they have done in the last three weeks than who is? The Seahawks slapped the 49ers right in the mouth on Sunday night and showed everyone that they are for real. There is a long ways to go, and there are some quality teams out there in the NFC including the Packers, Falcons and 49ers, but the way this team is playing, someone is going to have play quite a game to beat Seattle. They have put up a Madden like 150 points in their last three games which I believe is an NFL record.

It was great having Seahawks punter Jon Ryan on the "Sportscage" with me Friday.  He gave a lot of insight into what is happening in that locker-room right now and said that yeah, he wants pro bowl recognition to show that he is one of the elite. I think many of us already know that he is one of the best punters in the NFL---top five for sure. He hasn't had much of a chance to display his talents over the last three weeks though. That's OK.
------

I've had some people ask me when are the Riders going to make some player signings since some of the other teams have started locking up free-agents to be. Relax! I hear some are already done and the team is just waiting to release them and may do so or at least a couple of them before January 1.
-----
I really like the signing of former Rams DL Ryan Wellman by the Riders. Wellman is someone who just impressed me more and more each time I watched him this past season. I was shocked when former Rams QB Marc Mueller told me that Wellman replaced him as quarterback at Sheldon-Williams. A QB turned defensive lineman....you don't see that very often.
-------
It was great having Marc and Larry Mueller in the Sportscage for Four Seasons Football Friday. If Duane Forde takes a CFL job with someone, put Suitor with Rod Black and put Marc in alongside Chris Cuthbert. Chris would likely go for that in a heartbeat as he and both Marc and Larry are close. Anytime Schultzie can't make the Friday show, I won't hesitate in getting those two in.
------
Tim Tebow says the CFL isn't an option for him. I got news for you Timmie boy....you would be lost in the CFL trying to make a throw on the wide field. You might learn a thing or two though from Anthony Calvillo.
--------
Did you get a chance to see Rider neg list QB Keith Price and his Washington Huskies play Boise State on Saturday afternoon? The kid has CFL written all over him, but I can see him getting drafted by an NFL team. Did anyone also notice what I have for years in watching the Huskies play. Their helmets are almost identical to that of the Winnipeg Blue Bombers----almost right down to the font of the "W".
------
Lions receiver Calvin Johnson has killed the Madden Curse. That happens when you break the single season receiving yards record dont'cha know.
-------
Some easy Christmas money for this blogger thanks to the Seahawks and a Pick six contest that my good friends at Bethubb.com. I took $24 off of some guy that actually thought the Niners would win while another $20 came from picking six correct winners with no spread. I'm guessing and hoping BetHubb will do that again for the last Sunday of NFL play. If you know your NFL, get in there. A link can be found on the right hand side.
------
If someone got me a snowblower for Christmas (and I'm guessing that isn't the case), can I just have it now. GRRRRRR!!!!
------
One well travelled street that I use on an almost daily basis is in horrendous shape (and was so before the snow) while another residential street right next to it is basically smooth.  Something is definitely wrong with that picture.
---------
I don't know why, but I'm thinking this World Juniors may be a struggle for Team Canada. I haven't liked the lack of discipline that I have seen so far and I'm not sold on Malcolm Subban in net either. I'm still not getting up at 2 AM to watch them play Germany on Boxing Day and even though I thought about it, I am not getting a Molson Canadian wake-up call from Jay Onrait and Dan O'Toole. However, it does intrigue me as to what that call might be like.
-------
So some idiot in the U-S thinks that teachers need to be armed to prevent another Sandy Hook style massacre. Yeah, that will do it. Apparently, a former Regina mayoral candidate must have relatives in the U-S when you hear something that dumb! This clown, (the head of National Rifles Association) also said "The only thing that stops a bad guy with a gun is a good guy with a gun.". Yes, everyone should have guns you piece of toilet film. That will cure the woes of all. Puh-leeze!
------
The Raptors have won 5 in a row?
-----
Anchorman 2 comes out in 362 days. Until then, I leave you with this.

The Seahawks look pretty damn good, but there is a long ways to go yet.

Seahawks cost me 450 on Pro-Line. I needed the tie. I can't believe they spanked San Fran so bad. They're going to be tough.

If you get that snowblower, can I borrow it?

Price has had a nice year. I think next year is his draft year. I didn't really notice that the Bomber helmets are identical to the Huskies helmets. Merry Xmas Mitch

I agree with you Mitch, Team Canada will struggle at this year's Junior World Championships. For one thing there is only 6 WHLers on the roster. The years they win is when they are top heavy with good old Western boys. They need that WHL grit and dedication that developes on those long long bus rides. This team will play like individuals and might not get a medal.

Mitch. I am a little miffed that year after year hockey Canada ignores the WHL goaltenders and go with an eastern guy. Remember the last goalie to lead team Canada's to gold was a kid from Watson, Sk.

I did get up 2 watch canucks & Deutsche- sweet hands by RNH. Belated Merry Christmas!

Whats wrong with the pats. same thing year after year.