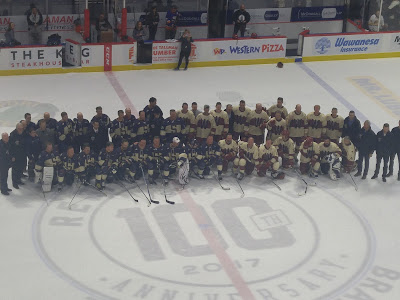 The final score didn't really matter to the players.  It was getting back on the ice, renewing old relationships and telling stories while having fun playing the game they love.

On Saturday afternoon at the Brandt Centre as a part of the Regina Pats 100th Anniversary Centennial Celebration, many who played for the Pats and other Saskatchewan based WHL teams took on a team featuring former NHL'ers who played for other Western Hockey League teams.

Staniowski, the former Pats goalie, who helped the team to their last Memorial Cup championship in 1974, showed he still has it as he made several dazzling saves in the opening period.

The 62 year old, who is a retired Lieutenant-Colonel for the Canadian Military, says it was an unbelievable experience.

"At my age and with my skill level, you just stand there and hope it comes to you and if it does that's a good thing." Staniowski said. "I don't do this often, but when I was asked to do this, I couldn't say no. The people of Regina were very fortunate to have this type of talent on the ice. It was a real privilege to be a part of it."

Armstrong, who won a Memorial Cup at the Brandt Centre with the Rebels in 2001, had a running gag going after saying he was donating 10 dollars per point scored to charity resulting in him getting announced on every goal no matter what team scored.

Armstrong says this has been a great weekend and he was thrilled to be a part of it.

"It was fun, I had a great time.  I loved the running gag. " Armstrong said. "I am very proud to be from Saskatchewan and have played in the Western Hockey League and I know how big it is for the event to be held here.  This rink and this city has fond memories for me and I can't wait to be back here for the Memorial Cup in a few months.

The homecoming weekend will close on Sunday when the Pats take on the Moose Jaw Warriors in a 2 o'clock start.

Before the game, the team will honor Jock Callander by retiring his number 15 jersey.


Those who thumbed their nose in the air at this missed a great afternoon of hockey and reminiscing!


I'm a rec league goalie and Eddie was better than me yesterday. HAHA!


Great day at the rink. A bargain at 25 dollars to see those names on the ice. Even got a chance to get my pic taken with Trottier and Gillies. As an Islander fan, it is a pic that will hang in the mancave.


Who was the guy behind the benches? "DEREK" Derkatch. That's an epic fail in that building!