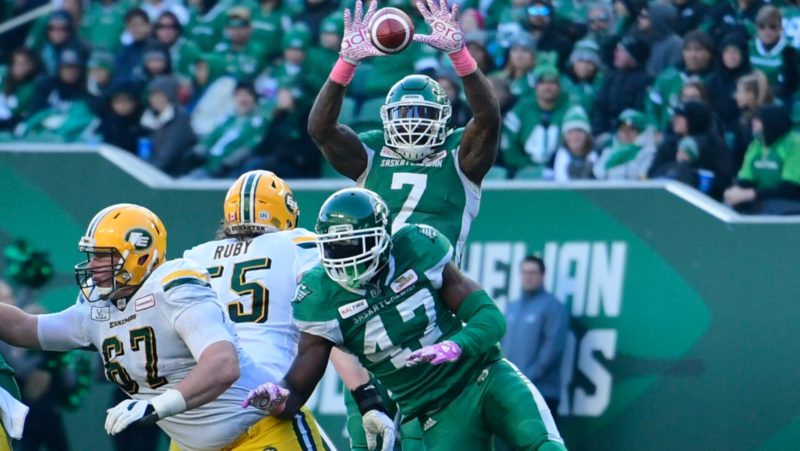 --Some of you like Madden-like CFL games where the final is 49-46 where both quarterbacks throw for 400 plus yards and some of you like good old-fashioned slobberknockers where you have to fight for each yard you get.  It wasn't pretty on Monday afternoon at Mosaic, but in a game that had a playoff feel to it, the defenses won the day with the Riders making the biggest play.

When Zach Collaros threw what was a bad interception to Mercy Maston with three minutes to play, many were likely already waiting to start grumbling to Michael Ball about how bad the Riders offence were and how they had blown a chance at a home playoff game until Willie Jefferson came along.  His 49 yard interception return with just under two minutes to go made it seven wins in eight games as they beat what has turned into a bad Eskimos team 19-12 and got one step closer to a home playoff game.

Just some thoughts on what transpired


--What has happened to the Eskimos?  The team that is hosting the Grey Cup and a team that I thought at the start of the season would do what the Riders did in 2013 and win it at home look terrible.  Yes, Mike Reilly looked a lot worse than he did because of the Riders defense, but there is nothing there to get me excited if I am an Edmonton fan.  It shocks me this team didn't go out and address needs seeing the GC is on their home turf.  The Riders found players like Gerpy Simon, Dwight Anderson, Ricky Foley to put them over the top.  Edmonton has done what?  Is that a Brock Sunderland thing or a Len Rhoades thing.  I would have to think Sunderland is the man to blame.

--I'm still somewhat stunned as to how a clerical error could cost the Regina Rams their three wins.  I can't help but think the U of R is planning to appeal the forfeit edict that came down after it was discovered that a mistake resulted in an ineligible player.  Rules are rules and yes, the Rams "broke" one, but by talking to many involved it was because of an administrative error.  If the punishment stands, it is a cruel, cruel way for a season to come crumbling down.  I would like to think some sanity will come to this as all will realize a mistake was made ---one the Rams weren't responsible for.  If the punishment stands though, it will be safe to assume all work in all programs when it comes to student-athlete intake will be double-checked, triple checked and quadruple-checked moving forward.

--The story of the weekend was UFC 229 and what happened after the main event.  Khabib Nurmagemedov went off the deep end and chaos ensued with his entourage. Dana White is talking tough after what went down, but don't tell me Dana doesn't know that a rematch is coming----one that many will buy after the post-match chaos.  Dana White knows exactly what he is doing.    If you watched the PPV,  "The Black Beast" Derrick Lewis won the night with his antics and his "My Balls Were Hot" comment.  His post-bout interview on FS1 was a howl as well.

--If you are an Oilers fan, you had to cringe when Cam Talbot let in the first shot of the game in the first minute -----AGAIN!!  It was a problem that really haunted the Oilers last year.  If Talbot can get his act together, Edmonton could sneak into the playoffs. If he doesn't, he can forget about a new contract in the Alberta capital.

--The NHL season is only a week old and people who hate the Leafs like me are already sick of them. It will be a long winter!

--I can't be the only one loving all the goals we are seeing in the first week of the season and hoping it continues.

--Why is the NHLPA appealing the 20 game suspension given to Tom Wilson.  Are they saying its OK to do what he did? Is Sundqvist not a member of the PA?

--I got my first look at the Pats on Saturday night.  For 20 minutes against Brandon, they were great. For 25, they were solid.  Then the Wheat Kings exploded for a pair of short-handed goals and it got ugly real quick.  We all knew Dave Struch's squad wasn't going to do what the Pats had done the last couple of years.  The team is trying to re-establish a base.  Talk this team won't win 20 games is a little premature, but wins could be few and far between this season as the process begins anew.  They are going through it in Moose Jaw and Swift Current too.

--Wouldn't it have been nice on Monday Night Football if ESPN would have put up the graphic showing Drew Brees as the NFL's all time passing yards leader, but number 3 in pro football behind Damon Allen and Anthony Calvillo.  Brees, who deserves every accolade he gets, has thrown for over 73000 yards, but he is still a couple of hundred yards behind Allen and six-thousand behind Calvillo.

--That's all I got.  Enjoy your turkey sandwiches and have a great week!!


In this win streak, how many games have the Riders won by less than a TD? A play here and a play there and they could be 8-7 or 7-8 instead of 10-5. Our receivers are terrible!


Great scheme by Jones. Reilly didn't know what to do. It was another game where the offense didn't score, but I thought they moved the ball. This just in, the Edmonton D isn't too shabby either.


Bradbury makes Proulx look competent. When I saw he was doing the game, I knew there would be 15 yard penalties galore and plenty of missed calls. The guy is horrible!


If Edmonton and SK end up tied, what is the tiebreaker now seeing both teams won their games by 7.

When will so called 'professional' defenses learn that on 'Hail Mary' passes you bat the ball down? You don't try to catch it and instead deflect it to the other guy.

Also no need to place the Moose Jaw Warriors rebuild with the Broncos or the Pats rebuild. I know the Warriors are not going to be the team they had last year but they didn’t sell the farm last season the way the pats and broncos did. The Warriors also got the same coaching staff returning with key pieces that are returning. Early results are showing that Moose Jaw is much further ahead in the rebuild then Regina and Swift. One team is playing above .500 hockey and the other 2 have a combined one win and have been consistently on the wrong end of one sided games.

If the Pats are rebuilding that should also include a new outside head coach coming in. Pats in need of a new approach.

Roughriders in need of serious help at their reciever positions. Roosevelt a great athlete done, move on he's damaged goods.

Why oh Why oh Why? The inept Ottawa REDBLACKS get a East Division crown bestowed upon them yet again with a undesevered playoff bye. Time to change the archaic CFLeague East West Division format. Common sense says 9 teams equals one division. Ohhhh, forgot, Canadians too stupid to rectify.

The Warriors are also getting crowds nearly as big as the Pats , which is astonishing since MJ has about 34,000 people compared to Regina area population of 236,000