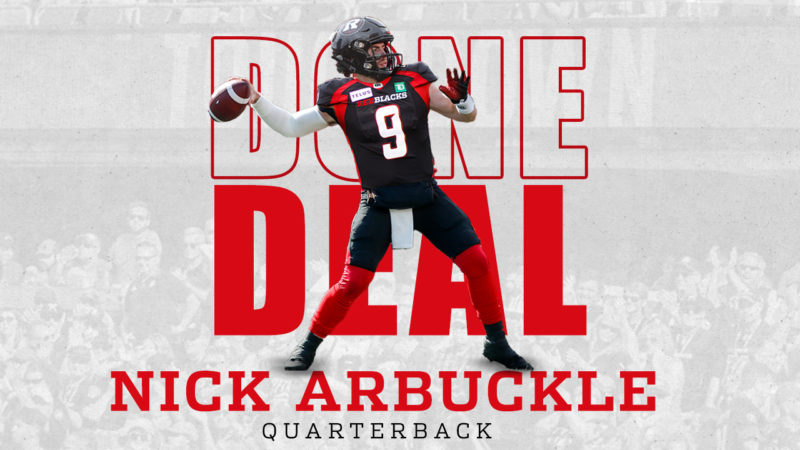 The Ottawa REDBLACKS announced Friday that American quarterback Nick Arbuckle has signed a two-year contract with the club ahead of the opening of the CFL Free Agency period.

Arbuckle’s rights were acquired by Ottawa earlier this month from the Calgary Stampeders in exchange for Ottawa’s third-round pick in this year’s CFL Draft. With the signing, the REDBLACKS and Stampeders will swap first-round draft selections.

“I am very excited to become an Ottawa REDBLACK and I can’t wait to get there and get to work as soon as possible,” said Arbuckle. “It’s an incredible feeling knowing that my wife and I will have the opportunity to start our family in such an amazing city.”

The 26-year old impressed in his second year in the CFL in 2019 after taking over for an injured Bo Levi Mitchell. The Georgia State product finished the season having completed 174 passes for 2,103 yards and 11 touchdowns. In 2016, he attended the Pittsburgh Steelers’ mini-camp.

“We were really impressed with Nick when we met with him and felt that, with what we’ve seen on tape, he’s someone who could put us in a position to be successful,” said Head Coach Paul LaPolice. “Nick brings the ability to lead a team to wins, with his intelligence, with his leadership, his ability to throw the ball and how he can process information on the football field. We’re excited to have him.”
at 2/01/2020