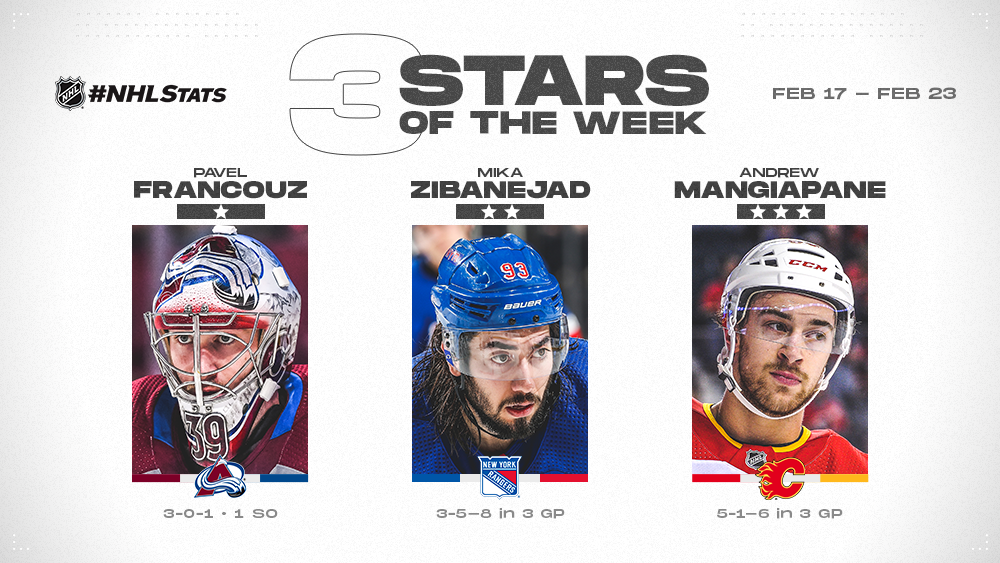 Francouz went 3-0-1 with a 1.46 goals-against average, .941 save percentage and one shutout to help the Central Division’s second-place Avalanche (36-18-7, 79 points) gain seven of a possible eight standings points for the week. Francouz opened the week making 23 saves in a 4-3 overtime loss to the Tampa Bay Lightning Feb. 17 and followed it up by stopping 27 of 28 shots in a 3-1 victory over the New York Islanders Feb. 19. He closed the week by stopping all 26 shots to earn his first career shutout in a 1-0 win over the Anaheim Ducks Feb. 21 and then one day later registered a 20-save performance in a 2-1 victory over the Los Angeles Kings Feb. 22. A 29-year-old native of Plzen, Czech Republic, Francouz is in his first full NHL season with the Avalanche where he has gone 16-5-3 in 26 appearances while ranking in the top five in goals-against average (5th; 2.27) and save percentage (t-4th; .927).

Zibanejad tied for the League lead with eight points in three games (3-5—8) to help the Rangers (33-24-4, 70 points) win all three outings on the week and move within four points of the second Wild Card position in the Eastern Conference. Zibanejad opened the week by matching a career high with four points (1-3—4) in a 6-3 victory over the Chicago Blackhawks Feb. 19 and followed it up with a 1-2—3 performance in a 5-2 win over the Carolina Hurricanes Feb. 21. He closed the week by scoring the game-tying goal in an eventual 3-2 triumph over the San Jose Sharks Feb. 22. Zibanejad, a 26-year-old native of Huddinge, Sweden, ranks second on the Rangers with 28-32—60 in 48 games this season – his 1.25 points per game in 2019-20 rank tied for eighth among all skaters with at least 25 appearances.

Mangiapane led all skaters with five goals in three games (5-1—6 in 3 GP) to help the Flames (32-25-6, 70 points), who occupy the first Wild Card position in the Western Conference, earn two wins in three contests. Mangiapane opened the week with a career-high four-point outing (3-1—4), including his first career hat trick, in a 6-4 win over the Anaheim Ducks Feb. 17. He was held off the scoresheet in a 4-3 loss to the Boston Bruins Feb. 21 before closing the week with a pair of goals, including the game-winning tally, in a 4-2 victory over the Detroit Red Wings Feb. 23. Mangiapane, a 23-year-old native of Toronto, Ont., has appeared in a career-high 61 games this season ranking fifth on the Flames in goals with 15-12—27.
at 2/24/2020