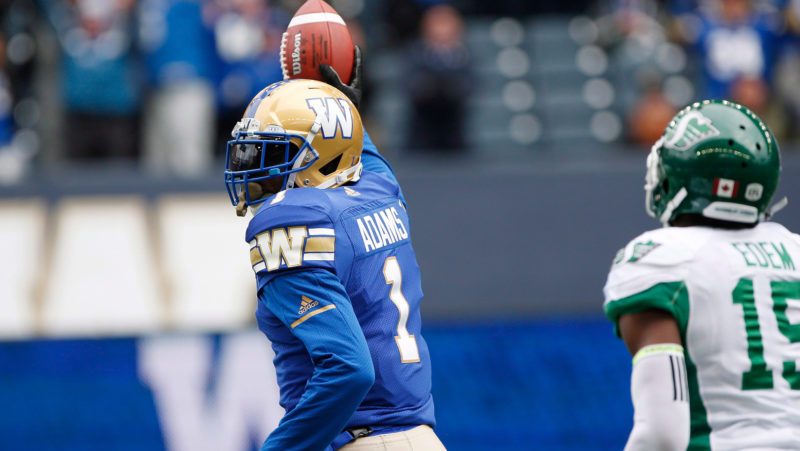 The Winnipeg Blue Bombers announced on Sunday that the team has agreed to terms with wide receiver Darvin Adams on a three-year contract extension, keeping Adams in Blue and Gold through 2022.

The 2020 campaign will mark the 30-year-old’s sixth with the Blue Bombers since joining the club in 2015 after two years with the Toronto Argonauts.

The veteran receiver was especially effective in the Bombers’ push to a championship, making some critical catches in three playoff games leading up to and including the Grey Cup. Adams had six catches for 105 yards and a 71-yard touchdown in the Western Semi-Final win over the Calgary Stampeders and a week later, pulled in eight catches for 93 yards in the Western Final victory over the Saskatchewan Roughriders. He then had three receptions for 11 yards in the Grey Cup decision over the Hamilton Tiger-Cats, and even completed a 13-yard pass to quarterback Chris Streveler.

He has 296 receptions for 4,226 yards as a Bomber, ranking him just outside the franchise’s Top 10 in both categories. He also has 34 touchdowns as a Bomber.

Williams, 26, started at defensive back in 16 of his 17 appearances (15 at field corner, one at boundary halfback) for the Tiger-Cats last season, finishing second in the Canadian Football League in pass knock downs with 14, and adding 50 defensive tackles, one interception and one fumble recovery. The 5-9, 190-pound native of Tampa, Florida also won the 2019 John Agro Award as the league’s Most Outstanding Special Teams Player and was named a CFL All-Star after ranking among league leaders in numerous kick return categories, including first in punt return yardage (949), 30+ yard punt returns (10), average yards per kickoff return (24.9) and kickoff return touchdowns (tie-1), second in punt return touchdowns (tie-1) and overall kick return touchdowns (tie-2), and third in average yards per punt return (12.5) and kickoff return yardage (1,071).

Williams has appeared in 31 career CFL games with 22 starts at defensive back over two seasons with the Tiger-Cats (2018-19), registering 67 defensive tackles, 10 special teams tackles, one interception and 15 pass knock downs. The Purdue University product has also served as Hamilton’s primary kick returner the last two seasons, accumulating 116 punt returns for 1,332 yards and two touchdowns, 61 kickoff returns for 1,478 yards and one touchdown, and one missed field goal return for 30 yards.