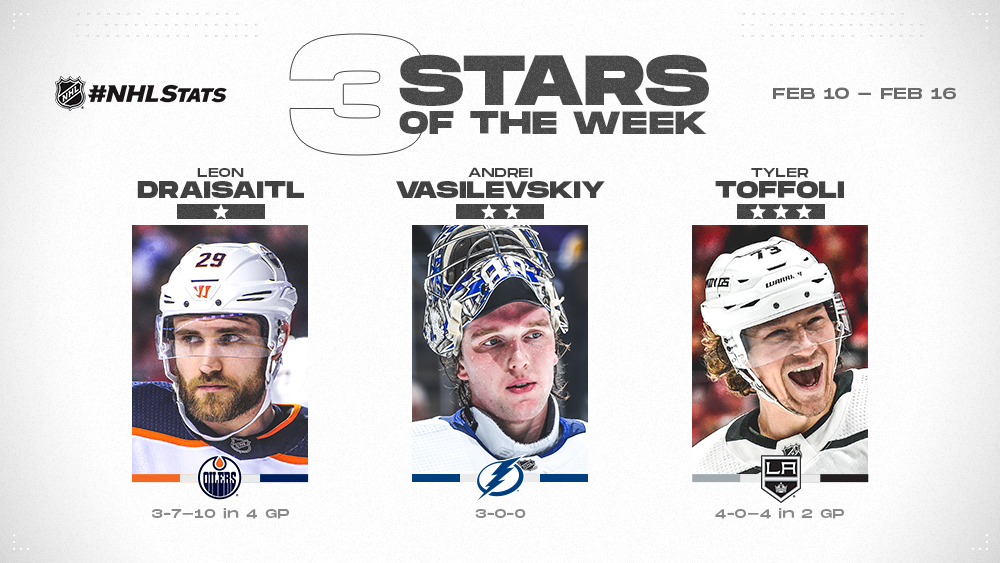 NEW YORK (Feb. 17, 2020) – Edmonton Oilers center Leon Draisaitl, Tampa Bay Lightning goaltender Andrei Vasilevskiy and Los Angeles Kings right wing Tyler Toffoli have been named the NHL’s “Three Stars” for the week ending Feb. 16.FIRST STAR – LEON DRAISAITL, C, EDMONTON OILERSDraisaitl led all skaters in assists and points with 3-7—10 in four games – including three multi-point performances – to lead the Oilers (32-21-6, 70 points) to a 3-1-0 record on the week and propel the club to first place in the Pacific Division standings. He opened the week with 1-3—4 in a 5-3 win over the Chicago Blackhawks Feb. 11 and added an assist in a 3-1 loss to the Tampa Bay Lightning Feb. 13. Draisaitl closed the week with his League-leading 28th and 29th multi-point games of the season, notching 1-1—2, including his NHL-best 10th game-winning goal of 2019-20, in a 4-1 victory over the Florida Panthers Feb. 15 and 1-2—3, including an assist in the extra frame, in a 4-3 overtime win over the Carolina Hurricanes Feb. 16. Draisaitl, a 24-year-old native of Cologne, Germany, has opened up a 13-point lead in the Art Ross Trophy race with 34-61—95 in 59 games – the fastest player to 95 points in a season since Sidney Crosby in 2006-07 (56 GP).SECOND STAR – ANDREI VASILEVSKIY, G, TAMPA BAY LIGHTNINGVasilevskiy recorded a perfect 3-0-0 record with a 1.64 goals-against average and .949 save percentage to help the Lightning (39-15-5, 83 points) earn a victory in all four games on the week and extend the team’s overall winning streak to 10 games. He opened the week by making 35 saves in a tightly-contested 2-1 overtime victory over the Pittsburgh Penguins Feb. 11 and then turned aside 29 shots in a 3-1 win over the Edmonton Oilers Feb. 13. Vasilevskiy closed the week with 30 saves in a 5-3 triumph over the Philadelphia Flyers Feb. 15 to improve to 19-0-2 in his last 21 appearances, including eight straight wins, and become the sixth different goaltender in NHL history to record at least one standings point in 21 or more consecutive appearances within a regular season. A 25-year-old native of Tyumen, Russia, Vasilevskiy leads all goaltenders with 32 wins in 2019-20 – seven more than the next highest total.THIRD STAR – TYLER TOFFOLI, RW, LOS ANGELES KINGSToffoli recorded four goals across two appearances as the Kings (21-33-5, 47 points) earned two victories in two games. He opened the week with one goal in a 5-3 win over the Calgary Flames Feb. 12. Toffoli then notched all three Kings tallies, including the game-winning goal in the final minute, in a 3-1 triumph over the Colorado Avalanche at the 2020 Navy Federal Credit Union NHL Stadium Series Feb. 15 to become the first player in League history to record a hat trick in a regular-season outdoor game. A 27-year-old native of Scarborough, Ont., Toffoli (18-16—34 in 58 GP) leads all Kings skaters with 18 goals in 2019-20 and sits two tallies shy of his fourth career 20-goal campaign.