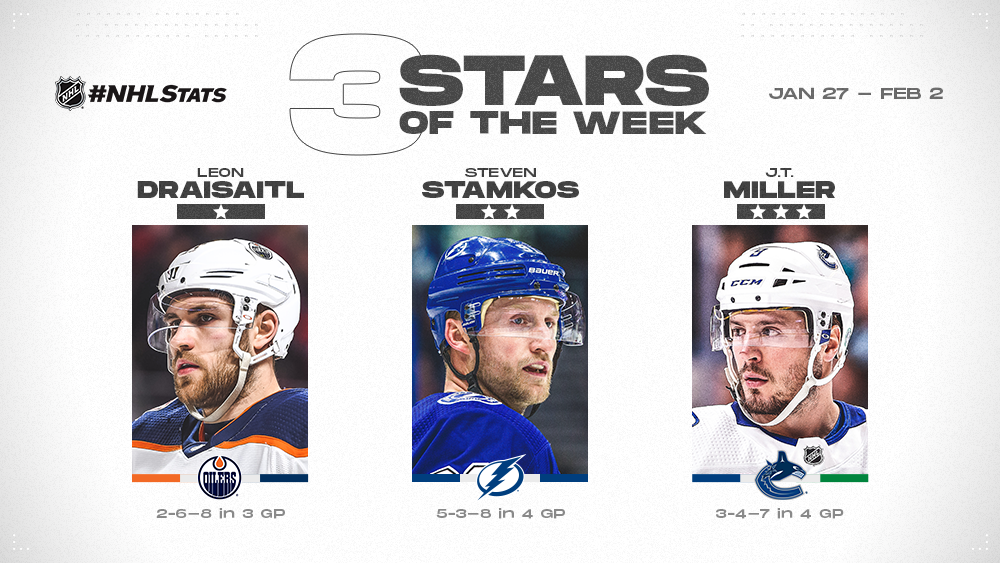 Draisaitl tied for the League lead with eight points (2-6—8) in three games last week as the Oilers gained five of a possible six points, improving to 28-18-6 (62 points), second in the Pacific Division. Draisaitl recorded multiple points in each game last week, starting with two assists in a 4-3 shootout loss to the Calgary Flames Jan. 29. On Jan. 31 against the St. Louis Blues, Draisaitl scored twice, including the game-winning goal, to spur Edmonton to a 4-2 victory and overtake teammate Connor McDavid for the League lead in points. He then extended his point streak to 11 games (7-15—22) with 0-4—4 in an 8-3 victory Feb. 1 in the second “Battle of Alberta” of the week. The 24-year-old native of Cologne, Germany leads the NHL with 29-54—83 in 52 games after becoming the fastest Oilers player to hit the 80-point mark in a season since 1989-90 (Mark Messier in 50 GP). His string of five straight multi-point games dating to Jan. 14 is the second-longest such run of his career (6 GP from March 14-23, 2017).

Stamkos led the NHL in goals (5) and points (5-3—8; tied) across four games as the Lightning (32-15-5, 69 points) won three of four contests to strengthen their hold on second place in the Atlantic Division. On Jan. 27, Stamkos reached the 20-goal mark for the 11th time in his career, scoring both Lightning goals in a 3-2 overtime loss to the Dallas Stars. He then posted his second straight multi-goal game Jan. 29, notching 2-1—3 in a 4-2 win over the Los Angeles Kings. The Tampa Bay captain closed the week with three points in a back-to-back set in California, recording an assist on the winning goal in a 4-3 triumph Jan. 31 at Anaheim followed by 1-1—2 in a 3-0 victory Feb. 1 at San Jose. A native of Markham, Ont., Stamkos, 29, ranks tied for 13th in League scoring with 23-33—56 in 49 games this season, including 6-6—12 over an active seven-game point streak dating to Jan. 14.