Tweaking the CFL Playoffs? Ambrosie is Considering It 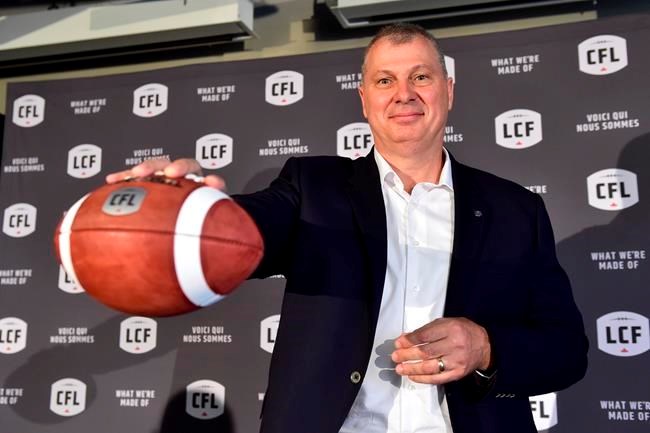 The CFL’s Man of the People again lifted the cone of silence Saturday to give community leaders and Ottawa Redblacks season-ticket holders a look at what the future may hold for the league.

CFL commissioner Randy Ambrosie, in the first stop of his cross-country Randy’s Road Trip that will visit each of the league’s nine cities along with a Feb. 23 stop in Halifax, spoke with passion about the CFL 2.0 initiative, how the CFL hopes to engage fans across the league but especially in Montreal, Vancouver and Toronto, a joint venture with U Sports to have the Vanier Cup and Grey Cup both played in Hamilton on the same weekend in 2021 and how the league may change the way it runs its playoff system.

Here’s how Ambrosie, who loves getting feedback from fans, answered some of the questions from the audience in an hour-and-a-half session at TD Place’s Otto’s Club.

ON CFL 2.0 AND FINDING NEW FANS IN CANADA

“We need to make the CFL more cool, being more international is part of that. You’re going to have, this year, two active (roster) spots for global players. We’re asking community associations to form a welcoming committee for the athletes coming to our training camps? Why? To re-energize the league, we have to get a Canadian but much more international audience to come to our games. At our scouting combine in Japan, our head global scout Greg Quick said there was a running back who looks like he was born to play CFL football. He had staggeringly good results. Let’s use that as an example. There are tens of thousands of Canadians who have Japanese heritage. We can use that to get the Japanese Canadian community to come and watch a kid from Japan play football. It mostly matters in our three biggest cities (Toronto, Montreal and Vancouver). (B.C. Lions owner) David Braley is in the hospital right now and I’ve been spending time visiting with him — we’ve been talking about a strategy to re-energize the Lions. David is really passionate about getting B.C. Place back to where it was. When I played there — 1985 my rookie season and we went there — B.C. was 5-0, we were 0-5 — there were 54,000 people for a regular-season game. I’m not that old, that’s not that long ago. We have a bunch of strategies we’re working on, but it’s got to be about diversifying our fan base. Our international strategy is not just about 100 million watching around the world on TV, it’s about reaching into the communities in Canada that aren’t necessarily familiar with football and welcoming them in through the introduction of athletes they can relate to.”


ON GETTING PLAYERS MORE INVOLVED IN COMMUNITIES

“We need to do more. As much as our coaches and players are among the most active in all of sport in community involvement, I want to create a ten-fold increase. We should be in Grade 4, 5 and 6 classrooms in every school in Canada promoting football and flag football. My wife says, ‘Can’t you just be satisfied with something small?’ I like doing big things. I want to do a 20-fold increase in the number of community visits. Every ethnic community — whether you’re Irish or Scottish or English or French or Italian, whatever it is, there’s probably a community association. We need to go see every one of them. We need to go knock on their doors and welcome them into the CFL community. In the next three years, I want us to do more community outreach than any other sports league in the world. I think that’s going to be a way to energize and re-energize our league and especially in those three biggest cities. They will not come unless we reach out and invite them.”

ON THE GLOBAL PLAYERS NOT BEING UTILIZED

“I think we have to create a roster spot for them. Last year (the CFL’s first year with global roster spots) would have been too early. It would have been too much to ask for those players who were making a pretty big jump from the football they were playing in their world. I think the quality of the international players will rise. The (CFLPA) is excited about it. They see the potential for our game. There are about 457 draft-eligible players from Canadian universities every year. There are about 12,000 U.S. college graduates (football players) every year. There are roughly 8,000 global players who are eligible to play CFL football every year. Put aside your national passions, you’d say there’s a lot of talent out there. We have to try to build our game and make it bigger. How do we do it? We’re going to have scouting combines on four continents this year. We’re already big and we’re getting bigger every day. There’s always, always going to be a big place for Canadians in our league — always. That’s an undeniable truth. But there’s certainly room for international players and U.S. players. Thirty percent of the players in the NHL today are international, they’re not North American. You don’t see Canadians up in arms that 30% of the NHL players are not (North American). I don’t see the villagers with pitchforks and torches burning Lansdowne because there’s an international playing for the 67’s. If we’re going to unlock the potential for a really big CFL, we’re going to have to find a way to get those players on the field. We are the second biggest football league in the world and I believe we’ll be the biggest global football league in the world.”

ON THE XFL AND COMPETING FOOTBALL LEAGUES

“Last year when I was here, it was the Alliance of American Football. I went through several months where the sky was falling, it was, ‘Oh, my gosh, the Alliance is coming and they’re going to eat your lunch.’ They didn’t last half a season. Now I get the same volume of calls that the XFL is coming and they’re going to eat our lunch. Before that, it was the USFL and they were coming. We have to be careful we aren’t spending too much of our time worrying about what somebody else is doing. We need to focus on our own game and build the biggest, strongest CFL we can build together. You can still learn good lessons. When someone else is innovating the game, you can learn good lessons from that.”

“It was really a discussion among the teams. They didn’t think they were getting as much value from those mini-camps as they wanted to get. So the question was, what was another way of doing it?’ Mini camps used to connect you to your players. If they left your city on Dec. 1, you might not see them again until training camp in May. Today, there’s so much more connection between players and coaches. You’ve got FaceTime. Players and coaches can stay in touch. The coaches and GMs felt it wasn’t a great use of resources and wanted to make that change.”

ON WHETHER THERE WILL BE MORE CFL WEEKS

“We were going to have it last year (in Ottawa), but because we were in CBA negotiations, we weren’t sure the players were going to come to CFL Week. I’m not saying that with any negativity. It was hard to imagine we could do it successfully so we decided to park it while we had the negotiations. It’s back on the docket around something we’re going to talk to the teams about. We had some success with it (in Regina and Winnipeg). One of the things that was really great is it brought a lot of our game’s biggest stars out and TSN did what they call their car wash, where they do all their pre-season video. It’s not dead, it was put into a pause.”

ON COMBINING THE GREY CUP AND VANIER CUP

“We’re going to try and have a combined Vanier Cup and Grey Cup in Hamilton in 2021. Our two biggest national football championships should be on the same weekend. Those kids who are playing great college football, we should give them the best opportunity to play in front of a huge crowd of football fans. U Sports football is very good football, how we help it grow is one of those things we’re talking about. We haven’t finalized it, but we’re getting close. This is an idea I’m passionate about it. Graham Brown from U Sports is passionate about it. Now we just have to iron out the final details. One of the things we’ve promised each other is if we do it, we’ll make at least a few-year commitment. It’s important for us to be leaders in the world of football, in particular football in Canada.”

ON CHANGING HOW THE CFL PLAYOFFS ARE RUN

“Major League Baseball is thinking about changing its playoff format where more teams would be involved. Here’s an idea that’s been floated (in the CFL). The first-place teams in the East and West would win their divisions and would host a playoff game — the same as we currently have. The difference would be that the third-, fourth-, fifth- and sixth-place teams in the league would make the playoffs, regardless of division. Third would play sixth and fourth would play fifth. It makes the late-stage competition for a playoff game more important. Here’s the next change: After the two semi-final games are played on Saturday, Sunday would be decision day for the first-place team. On a nationally broadcast show, the first-place team would pick who they’re playing from the (two semi-final winners). It’s something we’re talking about. If we did this, what we might have to agree on is we would do this for a limited amount of time until we got Halifax into the league — then we might have to make a different decision.”