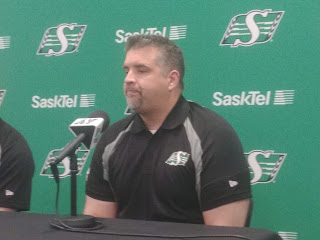 GM Jeremy O'Day said as much one day before free agency hit as both he and Head Coach Craig Dickenson answered questions on what the team's approach to free agency would be.

“I would say that we’re probably not going to be very active in free agency."  O'Day said. "We’re still talking to a couple of our players but it can change quickly depending on how the next day or two shape up.

While the Riders do appear set at many positions going into camp, one area where they may be looking to upgrade is at linebacker where Derrick Moncrief is trying his luck in the NFL while Solomon Elimimian has not signed a contract extension.  While the signing of Otha Foster, which was announced after the availability, will help, O'Day feels he will have a group that will be more than capable once the season starts.

"Jason (defensive co-ordinator Jason Shivers) feels comfortable with some of the guys that are on our roster, but we’re always going to try and create competition for every position." O'Day said.

While many pending free agents were signed to new deals, some weren't including defensive lineman Micah Johnson and receiver Naaman Roosevelt.  When it comes to Roosevelt, O'Day won't say for certainty that a return may not happen, but it sounds as if the team is moving on from the sure-handed pass-catcher.

Early Tuesday morning, a report from 3DownNation's Justin Dunk suggested the Riders will upgrade at backup quarterback as they have reportedly signed James Franklin to a deal.  Franklin was a quarterback many Rider fans coveted a few years ago as it was thought then Head Coach Chris Jones wanted to get him to Saskatchewan when he was a  member of the Edmonton Eskimos.'
at 2/10/2020