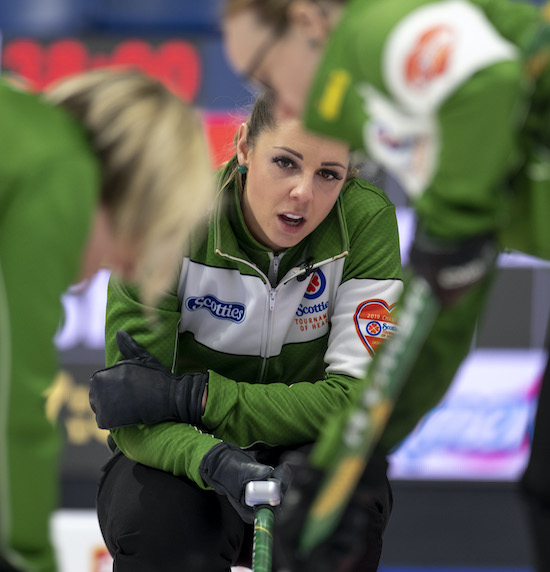 Provincial and territorial playdowns wrapped up this past weekend, and we know 15 of the 16 teams who will be chasing the Canadian Women’s Curling Championship in Moose Jaw, and that field will feature most of the country’s best teams.

Six of the top nine teams on the Canadian Team Ranking System have qualified, and the Wild Card Game on Feb. 14, to determine the final entry into the 2020 Scotties, will feature two other top-nine teams — No. 1 Tracy Fleury (East St. Paul) and No. 3 Jennifer Jones (Winnipeg) in an all-Manitoba battle.

The main Scotties field is headed by pair of skips are looking to add to their already impressive haul of Canadian championship gold medals.

Rachel Homan and her team from Ottawa (No. 4 on the CTRS) — vice-skip Emma Miskew, second Joanne Courtney, lead Lisa Weagle and coach Marcel Rocque — will be looking for a fourth Scotties title, and her first since winning in 2017 at St. Catharines, Ont.

But Homan will have to find a way to get past defending champion Chelsea Carey and her Calgary team, who defeated Homan in last year’s final at Sydney, N.S. Carey, backed up by vice-skip Sarah Wilkes, second Dana Ferguson, lead Rachel Brown and coach Dan Carey, is looking for a third Scotties title.

Ontario will get an early test on opening day — Team Homan will play the winner of the Wild Card Game in the evening draw on Feb. 15, starting at 6:30 p.m. (all times CT).

Saskatchewan will open the 2020 Scotties in Draw 1 on Feb. 15 (1:30 p.m.) against New Brunswick’s Andrea Crawford, and then will be back on the ice for a pair of games on Sunday, including a battle with the reigning champs, Team Canada, in the afternoon draw at 1:30 p.m., followed by a night game (6:30 p.m.) against Nunavut’s Lori Eddy.

The Wild Card game (7:30 p.m., TSN/RDS2) at Mosaic Place will feature Jones, a six-time Scotties champion, taking on Fleury after both teams fell short to Kerri Einarson’s Gimli team in the Manitoba championship. Team Jones and Team Fleury qualified for the Wild Card Game as the top two teams on the Canadian Team Ranking System that didn’t win their provincial or territorial championship.

Jones defeated Fleury in the Manitoba semifinal before being losing to Einarson in the final. Admission to the Wild Card Game is free, but donations to the Curling Canada Foundation, helping youth curling across Canada, are being accepted at the door.

The 16 teams have been split into two pools of eight. The top four teams from each pool after the preliminary round robin will then advance to a championship pool that will determine the final four playoff teams.

The pools are set based on the teams’ position on the CTRS as of Dec. 31; the winner of the Wild Card game will automatically have a No. 3 seed.

Here’s a look at how the two pools set up: