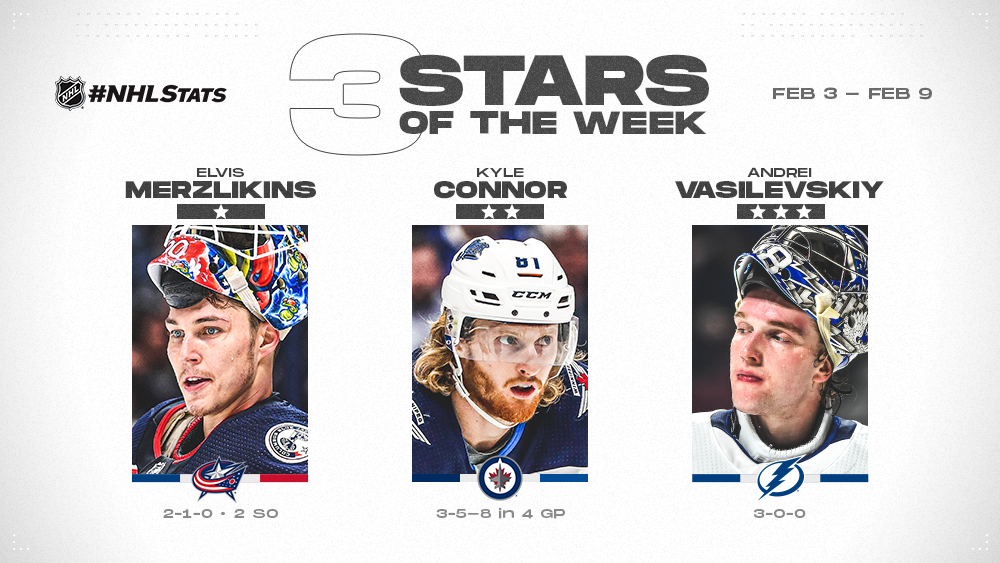 Merzlikins went 173:39 before allowing a goal last week, posting a 2-1-0 record, 0.67 goals-against average, .971 save percentage and two shutouts as the Blue Jackets improved to 30-17-9 overall (69 points), third in the Metropolitan Division. Merzlikins began the week by stopping all 32 shots in a 1-0 overtime victory over the Florida Panthers on Feb. 4. Three nights later, he stopped all 16 shots in a 2-0 triumph over the Detroit Red Wings, extending his win streak to eight games (the longest ever by a Columbus rookie) with his League-leading fifth shutout – all in a span of eight games. He closed the week with a 20-save effort Feb. 8 in a 2-1 loss to the Colorado Avalanche, stopping each of the first 17 shots he faced. Merzlikins, 25, a native of Riga, Latvia, has a 12-7-4 record through 25 games in his first NHL season (2.19 GAA, .930 SV%, 5 SO). Only three different Blue Jackets goaltenders have recorded more than five shutouts in a single season, with Steve Mason (10 in 2008-09) the only to do so as a rookie.

Connor led the League in points with eight (3-5—8) as the Jets (29-23-5, 63 points) gained seven of a possible eight points to move from three points outside the playoff picture into the first Wild Card spot in the Western Conference. Connor was held off the score sheet in a 2-1 overtime loss to the Nashville Predators on Feb. 4 and recorded one assist in a 4-2 victory over the St. Louis Blues on Feb. 6. Over a weekend back-to-back set Feb. 8-9, Connor recorded 1-3—4 in a 5-2 win over the Ottawa Senators followed by two goals and one assist in a 5-2 victory over the Chicago Blackhawks. In doing so, Connor became the seventh different player in franchise history to record at least three points on consecutive days (and third to do so since the club moved to Winnipeg). Connor, 23, a native of Shelby Township, Mich., is in his fourth NHL season and sits 13th in League scoring with 59 points (28-31—59 in 57 GP). He needs two goals to become the third player in Jets/Thrashers history with at least three consecutive 30-goal seasons.

Vasilevskiy went 3-0-0 with a 1.67 goals-against average and .936 save percentage to guide the Lightning to a perfect week and an overall record of 35-15-5 (75 points), second in the Atlantic Division and third in the entire NHL. Vasilevskiy led Tampa Bay to 4-2 wins against the Vegas Golden Knights (Feb. 4; 27 saves) and Pittsburgh Penguins (Feb. 6; 29 saves) before closing the week with 17 saves in a 3-1 triumph over the New York Islanders on Feb. 8. All three victories came at AMALIE Arena as Vasilevskiy pushed his home winning streak to eight games, matching the franchise record for the third time in as many seasons. Vasilevskiy, 25, a native of Tyumen, Russia, owns an overall record of 29-9-3 in 41 games this season (2.48 GAA, .918 SV%, 2 SO) as he aims to become the second Lightning goaltender to record three consecutive 30-win seasons. His active 18-game point streak (16-0-2 dating to Dec. 17) is one of 16 in NHL history of at least that length – and the second-longest by any active goaltender.