Otha Foster Returns To CFL As He Signs With Riders 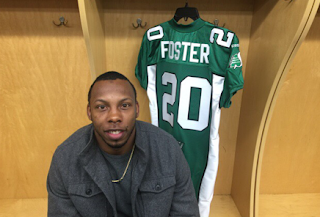 The Saskatchewan Roughriders have signed free agent defensive back Otha Foster to a one-year contract.

Foster (6’0 – 205lbs) returns to the Roughriders after a two-year absence, having initially signed with the Club in 2016. Foster most recently spent time with the B.C. Lions in 2018, where he played 18 games and made 58 tackles, one special teams tackle, three sacks and two forced fumbles.

Foster played four preseason games for the Baltimore Ravens in 2017, making three tackles and one sack. He returned to the Roughriders that fall and played in three games for the Green and White making 11 defensive tackles. He had a standout year at linebacker in 2016, where he put up a career-high 71 defensive tackles, two special teams tackles, three sacks, one interception and one forced fumble.