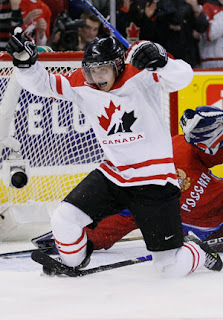 Edmonton Oilers forward Jordan Eberle is the No. 1 player in Team Canada history at the World Juniors, as determined by a poll of 25 hockey experts for TSN's Team Canada's 40 Greatest Juniors special (Tonight at 7:30pm et/4:30pm et on TSN and TSN Mobile TV).

The list was compiled in celebration of the 40th anniversary of the World Juniors tournament.

Eberle played for Team Canada at the IIHF World Junior Championship in 2009 and 2010, winning a gold and silver medal. In 2009, Eberle scored one of the most memorable goals in Canadian World Juniors history against Team Russia in the semifinal round. The following year, he was named tournament MVP and Best Forward.

A native of Regina, Eberle receives $5,000 to donate to his charity of choice – The Hospitals of Regina Foundation – for being named the top Canadian player in World Juniors history.

"Team Canada has a rich and storied tradition at the World Junior Championship and I'm honoured to be a part of it," said Eberle. "It's flattering to be named No. 1, but as a Canadian, it's always amazing to play for Canada and put on the maple leaf."

The panel of experts polled for TSN's Top 40 list includes hockey broadcasters, writers, scouts, and executives who cover or are involved with the IIHF World Junior Championship.

"To determine Canada's greatest players at the World Junior Championship, we asked 25 of the greatest tournament watchers to give us their choices and we believe the results speak for themselves," said Steve Dryden, Managing Editor of Content, TSN. "We are proud of the panel's work narrowing a list of hundreds of players who have represented Canada to a Top 40."

TSN's James Duthie hosts the 60-minute special tonight alongside Hockey Insider Bob McKenzie as they break down the exclusive list of Top 40 players. The special also features a countdown of the Top 10 most dramatic moments in Team Canada history at the World Juniors.

The Top 10 players on TSN's Team Canada's 40 Greatest Juniors list are as follows: