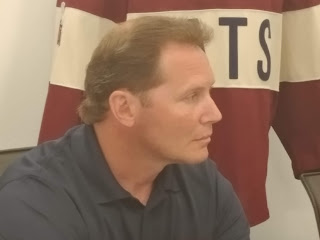 The Regina Pats Hockey Club is pleased to announce changes to their hockey operations staff for the 2018-19 season.

John Paddock, who has served as VP of Hockey Operations, General Manager and Head Coach for the last four seasons, is relinquishing his head coaching duties, allowing Dave Struch to take over behind the bench. Paddock will continue to serve as VP of Hockey Operations and General Manager. Previously, Struch served as Assistant Coach and Assistant GM.

“We are really excited about this transition in our organization,” said Pats President Todd Lumbard. “Dave is an excellent coach and will do a great job in continuing what we have built over the last four seasons.”

John led the Pats to a record of 165-89-21-13 over four seasons, including a franchise record 52 wins and 112 points in 2016-17. Regina won the Scotty Munro Memorial Trophy as Regular Season Champions, won the East Division and appeared in the WHL Championship Series in 2017. In 2015 and 2017 Paddock was named WHL Coach of the Year, and was the 2017 WHL Executive of the Year.

“This transition is something we have talked about for some time,” said Paddock. “Dave and I think the game the same way and as we move into a different stage as a team, this move makes a lot of sense.”

Struch has been with the Pats through all of the success over the last four years. This will be his second head coaching job in the WHL.

“It is an honour to take on this new position,” said Struch. “We have a great program here in Regina and I look forward to continuing to build a winner on and off the ice.”

Struch has been coaching in the Western Hockey League since 2006, his first stint was with the Saskatoon Blades before moving to Regina in 2014. Struch played four years in the WHL with Saskatoon from 1988 to 1992, appearing in the 1992 Memorial Cup Championship with the Blades. Drafted in the ninth round of the 1991 NHL Entry Draft by the Calgary Flames, he played four games in the NHL and 110 in the AHL. Struch went on to play nine seasons in Europe, Italy and England.

Mr Struch bided his time as head-coach in waiting 4 years but this move handcuffs the organization to the same old same old. Pats President Todd Lumbard needs to curb his enthusiasm as this move not the high octane injection the on Ice product needs, (play systems). Expect a vast obvious drop-off for the Pats moving forward with a Impatient fanbase still waiting on a long overdue (not for a lack of trying) Memorial Cup Championship.


Real shame that someone you know so well has had his butt hurt by the Pats to the point he can't even talk about this on his sports show.