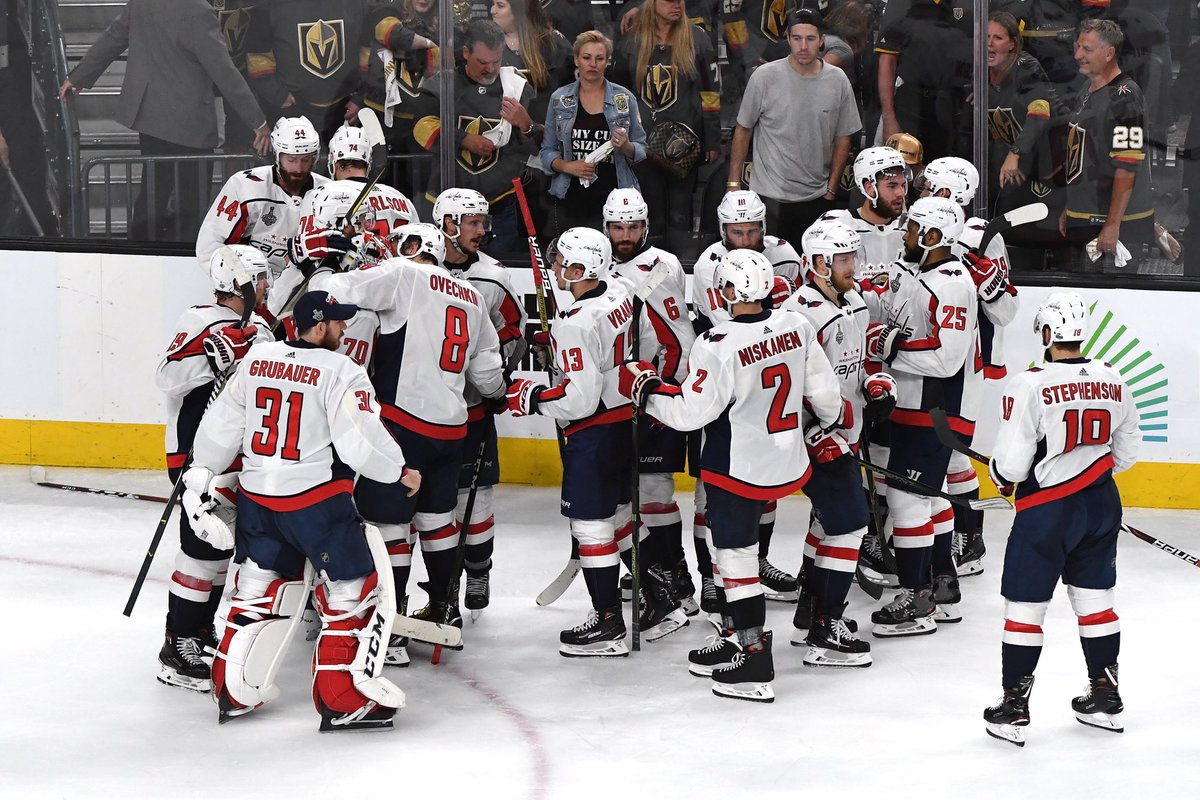 * Washington enters Game 3 with a 4-5 record at Capital One Arena this postseason, outscoring opponents 30-27. Overall, the team is 68-71 in 139 all-time home playoff games (0-2 in Stanley Cup Final). The Capitals last hosted a Stanley Cup Final game on June 16, 1998, when the Red Wings clinched the series with a 4-1 victory in Game 4.

* The Golden Knights own a 6-2 record as visitors during the Stanley Cup Playoffs, outscoring opponents 18-15. Only one other NHL team has earned as many road wins in its first postseason appearance: the Wild, who went 6-4 as visitors in 2003 (their 3rd NHL season).

Put the Brooms Away

The Golden Knights and Capitals traded the lead four times in Game 1 of the Stanley Cup Final. Washington overcame a 1-0 deficit to go ahead 2-1, Vegas responded by taking a 3-2 advantage. The Capitals then rallied for a 4-3 lead, but the Golden Knights scored the final three goals for a 6-4 victory.


It marked just the third game in NHL postseason history – and first in the Stanley Cup Final – to feature four lead changes. The others: Game 2 of the 1936 Quarterfinals (NYA 4 at CHI 5) and Game 2 of the 1992 Division Semifinals (EDM 5 at LAK 8).

Overall, there have been five lead changes through the opening two contests of the series.

* Ovechkin has collected 10-13—23 in 18 career Game 3s, his highest assist total and second-highest goal and point totals of any game. That includes 1-3—4 in three Game 3s this postseason, in which the Capitals are 2-1. Despite Ovechkin averaging 1.3 points per game in Game 3s, the Capitals are just 7-11 in those contests (1-3 at home).

Ovechkin, who eclipsed 600 goals and 1,000 games during the regular season (607-515—1,122 in 1,003 GP), is making his Stanley Cup Final debut in his 13th NHL season. Only one player has scored more regular-season goals prior to making his Stanley Cup Final debut: Dave Andreychuk, who had 634 goals when he played for the Lightning – and ultimately won the championship – in 2004.


* Ovechkin has registered 32 goals in 54 career games (regular season and playoffs) against Vegas goaltender Marc-Andre Fleury. That includes 21 goals in 38 games during the regular season, and 11 goals in 16 contests during the playoffs.

* Overall, the Capitals are 26-6-2 in games in which Eller has scored (regular season and playoffs) during his two seasons in Washington. That includes a 6-0 record during the 2018 Stanley Cup Playoffs.

* Goaltender Braden Holtby made a spectacular stick save to preserve the Capitals’ Game 2 victory. He owns a 42-37 record in 79 career playoff appearances, compiling a 2.04 goals-against average, .929 save percentage and six shutouts. That is the second-highest save percentage and fifth-best goals-against average in NHL postseason history among goaltenders with at least 50 outings.

* Holtby, who posted shutouts in Games 6 and 7 of the Eastern Conference Final vs. TBL, had his shutout streak snapped at 166:42 in Game 1 of the Stanley Cup Final. He became the 27th different goaltender in NHL history to record a shutout in a Game 7 and the fifth to do so to clinch a berth in the Stanley Cup Final. Of those five, Harry Lumley and Dominik Hasek also posted shutouts in Game 6 of their respective series.

* Defenseman Brooks Orpik snapped a 220-game goal drought (regular season and playoffs) – the longest active such streak in the NHL – with his winning tally midway through the second period of Game 2. Orpik, the only Washington player with Stanley Cup Final experience entering the series, went 181 regular-season and 39 playoff games between scoring goals (last, Feb. 26, 2016 vs. MIN).

* John Carlson scored his 17th career playoff goal in Game 1 (all w/ WSH), moving past Kevin Hatcher (16) for the most by a defenseman in Capitals history. Carlson leads NHL blueliners with 4-13—17 this postseason, franchise records for assists and points by a defenseman in one playoff year.


* The Golden Knights are the first expansion team in 50 years from the NHL, MLB, NBA or NFL to even reach the championship series or game in its inaugural season. The 1967-68 Blues were the last to accomplish the feat, emerging from the NHL’s all-expansion West Division to advance to the Stanley Cup Final (where they ultimately lost to the Canadiens in four straight games).


* Forward Jonathan Marchessault has registered half of his team-leading eight playoff goals in games following a loss, scoring in each of those three contests for a total of four goals and seven points. In the Second Round vs. SJS, Marchessault collected 1-2—3 in Game 3, including an assist on William Karlsson’s overtime goal that gave Vegas a 2-1 series lead. In Game 5 against the Sharks, he posted 1-1—2, including a late insurance goal to give the Golden Knights a two-goal advantage. Marchessault then scored twice in Game 2 of the Western Conference Final at WPG, including the winning goal, as the club rallied for four straight wins to clinch the series.

* Forward Tomas Nosek (2-0—2) registered the first multi-goal game and winning goal of his NHL career in Game 1 of the Stanley Cup Final. Nosek was skating in his 97th NHL contest (regular season and playoffs). Vegas acquired the 25-year-old Pardubice, Czech Republic, native from Detroit in the 2017 NHL Expansion Draft. He originally signed with the Red Wings as an undrafted free agent in 2014.

* Nosek became the 10th Golden Knights player with a game-winning goal in the 2018 Stanley Cup Playoffs, one shy of the NHL postseason record last accomplished by the 2017 Predators.

* Defenseman Nate Schmidt, who was acquired from Washington in the 2017 NHL Expansion Draft, returns to Capital One Arena for the second time with Vegas. Schmidt, who totaled 8-35—43 in 200 regular-season games and 1-4—5 in 21 playoff contests with the Capitals from 2013-17, collected one assist in the Golden Knights’ lone regular-season trip to Washington – a 4-3 victory Feb. 4.
at 6/02/2018