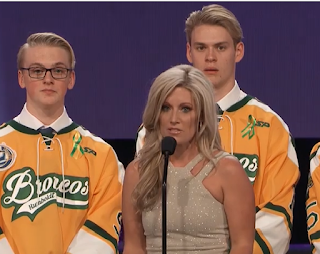 --An emotional night at the NHL awards in Vegas as the wife of the late Darcy Haugen accepted the first ever Willie O'Ree award. That award goes to an individual who - through the game of hockey - has positively impacted his or her community, culture or society.  In accepting with the surviving members of the April 6 bus crash behind her, Christina Haugen said and said her husband's legacy could not be found in the statistics, but in the many players he coached.

--New Jersey Devils forward Taylor Hall has been named the winner of the Hart Trophy as the NHL's Most Outstanding Player. Hall got more votes than Anze Kopitar of L-A and Nathan McKinnon of Colorado to become the first New Jersey player to win MVP honours. Meanwhile,  P.K. Subban, no stranger to video game-like moves on the ice, is the cover athlete for EA Sports' ``NHL 19.''
The Nashville Predators defenceman was unveiled as the made-in-Canada video game's cover boy during the awards show.

--A report from a Miami Dolphins-related website is saying former Saskatchewan Roughrider and Dolphin Chuck Klingbeil has passed away at the age of 52. Klingbeil started his professional football career with the Riders and was part of the team that won the 1989 Grey Cup.  He joined the Dolphins in 1991 and played 65 games with them through five years.

--Diego Costa had his third goal of the World Cup tournament to lead Spain past Iran 1-nil. The 2018 tournament in Russia is the first World Cup since 1954 without a single nil-nil draw in the first 20 matches. Earlier today, Portugal beat Morocco 1-nil and Uruguay edged Saudi Arabia by the same score.

--Phil Mickelson has apologized four days after intentionally violating golf rules by hitting a moving ball on the green at the U-S Open. Mickelson admitted in a statement released today that he should have apologized sooner. The star golfer hit a ball sliding past the 13th hole during the third round.
at 6/21/2018


That speech was tremendous. Left me crying again!