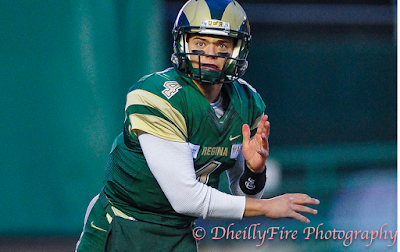 Toronto Argonauts head coach Marc Trestman has been impressed with Canadian quarterback Noah Picton’s performance in training camp but that isn’t translating to opportunities on the field.

Picton didn’t play in the Argos 36-18 pre-season win over the Hamilton Tiger-Cats as the team took a long look at McLeod Bethel-Thompson and James Franklin who are competing for the No. 2 job behind Ricky Ray. Even more telling: Trestman says Picton has yet to take a rep in practice with the offence.

“He’s been an impressive young man in the meeting rooms, he’s extremely knowledgeable,” Trestman said. “If you saw him warm up he threw the ball really well, it was impressive to watch.”

Bethel-Thompson and Franklin each played an entire half in the Hammer while Picton watched from the sidelines, dressed in his familiar No. 4 jersey.

“They got a lot of evaluations to do and I understood that. I was definitely hoping to get in. They said to stay ready so I was sharp I was ready to go if I got the call,” Picton said. “It didn’t work out but we’ll see what happens next week.”

The Argos signed the Hec Crighton Trophy winner a week after Picton went unselected in the 2018 CFL Draft. The Double Blue were among three teams to interview Picton at the CFL Combine.

Picton earned the contract from the Argos by setting a USports single-season record with 3,186 passing yards in 2016. The University of Regina Rams product followed that up with a first-team All-Canadian selection in 2017. He’s already the Canada West conference’s all-time leading passer with 9,840 yards.

Now Picton is getting a chance to learn the pro game from the likes of Trestman and Anthony Calvillo, the CFL’s career passing leader who is the Argos quarterbacks’ coach.

“Learning from some of these guys like Trestman, A.C., Ricky, the quarterback room as a whole it’s a bit of a whirlwind, it’s a different offence from what I’ve been used to, mentally there are some leaps and bounds that I’m making,” Picton said.

“You look at those names and it’s pretty spectacular but they’re just football players. They’ve welcomed me just like any other player, I’m feeling like just one of the guys and hanging out with them and learning from them like any other player or coach it’s just a bigger magnitude.”

Picton has quickly developed a bond with Franklin, who was acquired by Toronto in a January trade. He and some of the other Argos were chanting the national quarterback’s name as his interview took place.

“I’ve actually gotten to really like Noah a lot. I enjoy sitting by him in team and QB meetings. He’s definitely become one of my favourites. I hope he does get an opportunity. I know he’s working hard at it,” Franklin said.

Unfortunately, with the battle between Franklin and Bethel-Thompson for the backup role still undecided, Trestman said he isn’t sure Picton will see playing time in the team’s exhibition finale on June 7 in Guelph against the Ottawa Redblacks.

“I would say probably not,” Trestman said. “But that could change over the week.”

At 5-foot-8, 177-pounds, Picton has faced plenty of doubters but beaten long odds before so there’s no reason to lose hope yet.

“If I get an opportunity, wherever it is,” Picton said, “I’m going to try and seize it.”