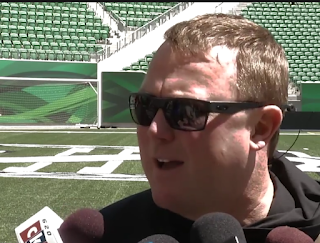 --Chris Jones is having fun. The Riders head coach said Tuesday he isn't telling anyone who his starting quarterback will be Friday versus Toronto.  Jones made the following statement when asked about his starting QB:
“I’ve known for two weeks how we’re going to play, but I ain’t telling y’all until we get ready to play,” Jones said. “Why would I give something like that up to our opponent where they can know exactly what we’re going to do? Doesn’t make good sense, right?

--The wife of Ottawa Senators captain Erik Karlsson has filed an order of protection against the girlfriend of one of Karlsson's teammates, alleging harassment and cyberbullying. In an application for a peace bond filed May 4th in an Ottawa court, Melinda Karlsson alleges that Monika Caryk posted hundreds of derogatory online messages aimed at her and her husband. Caryk is the longtime partner of Senators forward Mike Hoffman.

--New Saskatoon Blades coach Mitch Love will serve as an assistant coach for Canada's entry at the Hlinka-Gretzky Cup later this summer.  That tournament will be played in Edmonton and Red Deer.

--Bad news for the Detroit Tigers.  Miguel Cabrera ruptured his left biceps tendon, an injury that will sideline the Detroit slugger for the rest of the season. Cabrera was hitting .301 this season with three homers and 22 RBIs.

-- The Associated Press reports that Nick Nurse has agreed to become the next coach of the Toronto Raptors. Nurse is replacing Dwane Casey, who was fired after Toronto was swept from the second round of the playoffs by Cleveland. Nurse worked under Casey the past five seasons as an assistant. Casey was named head coach of the Detroit Pistons yesterday.


That Karlsson-Hoffman story is creepy, bizarre and unbelievable. I am guessing this has to be part of the reason EK wants out of Ottawa. Can't blame him!


Poor Vanstone must be spinning in circles because of Jones and its only Week 1! HAHAHAHAHAHA!