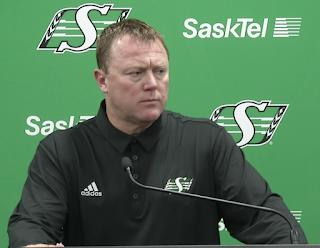 --Chris Jones defended his cuts on Sunday as the Riders like other CFL teams got down to the mandated roster size of 46 plus 10 practice roster players.  Jones said it was not easy releasing Rob Bagg, but a players popularity doesn't determine if he stays or not.  Jones says listening to the fans makes you end up looking weak.

--A setback for Vladimir Guerrero Junior.  The highly prized Blue Jays prospect will miss four weeks with a patellar tendon sprain in his left knee.  It was thought the Jays were ready to promote Guerrero to Triple A Buffalo at any day as he continues his much-awaited ascension to the majors.

--Dustin Johnson is back in his spot as the world's top-ranked golfer thanks to a dominant victory capped by an absolutely amazing hole-out for eagle. Johnson shot a 4-under 66 on Sunday making the St. Jude Classic his second PGA Tour victory this year and 18th of his career to take back the No. 1 ranking he held for 64 straight weeks before falling to No. 2 behind Justin Thomas a month ago.  Next up for Johnson and the rest of the Tour is the US Open which starts Thursday.

-- Consider Seahawks free safety Earl Thomas officially a holdout.
Thomas tweeted Sunday that he will not attend the Seahawks’ minicamp this week or any other team activities “until my contract situation is resolved.” Thomas is entering the final season of a four-year, $40 million contract and wants an extension and raise.
at 6/10/2018