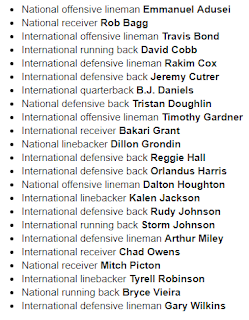 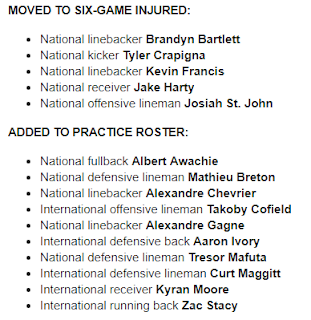 Crapinga must have pulled a muscle on that 52 yard field goal Friday night LOL.

Adusei cut? Shocking! I would put his name at the top of the list if his last name started with "Z". Understand the Owens cut, but am left scratching my head at the Bagg and Grant cuts especially when Picton gets axed too.


Bagg, Owens and Grant are all guys getting long in the tooth. Bailey and Holley are younger and cheaper. Its called the business of football. I don't know why so many can't understand that.

If only they would cut oday on the admin side of business. He brings nothing to the table for the Roughriders franchise, excess team money being spent on a made up position. Time to trim the organization fat included the useless know nothing board of directors.

I'm disappointed in this list. I was hoping Jones, Murphy and MacAdoo would be released.


How much was Grant making? You have a new QB in there and 3 WR's who knew the offence are let go. Owens was 36 so that isn't surprising, but Bagg still has gas in the tank and Grant was our leading receiver last year. Not sure if Jones was thinking with a clear head when he made these decisions.

Jones might be a decent coach, I repeat might be. But what ever made Craig Reynolds think Jones was a GM? There's less depth on this team than there was three years ago.