Welcome to Friday. Here are the usual assortment of thoughts running through my muddled mind. As always, they come in no particular order. 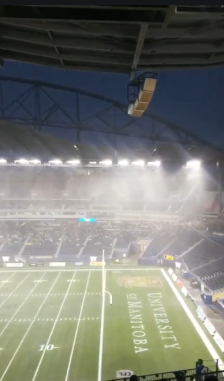 --The CFL season is here....or is has it been delayed again?  Did those who moaned and whined and complained about the weather on Grey Cup Sunday get to see a football game played in three and a half hours. I believe they did!  Did those wanting to watch the Bombers-Eskimos game Thursday night get to see the first half in three hours.  No they didn't.  I don't know what time the game ended because I didn't get to the second half.  I didn't even get to the end of the first half.  Like the league couldn't control the weather in Ottawa on Grey Cup Sunday, they couldn't control it in Winnipeg on the second Thursday of June either.  Players can play when it is snowing lightly.  They can't play when there is thunder and lightning nearby. In the end, it is a disastrous opening act for the CFL. Some people loved playing the Grey Cup in a snow-globe, but I am guessing no one loved what they saw Thursday in what looked to be an entertaining 1 and 3/4 quarters   I am guessing no one east of Winnipeg gave a rat's you know what when they called it for the second time.  As Randy Turner of the Winnipeg Free Press said on Twitter, the way that game went, Matt Nichols will be back for the 4th quarter.

--Does anyone wish they had a mic on Jason Maas through all of this?  I bet he was Mr. Happy all the way through.


--In 2013, the Riders treated their fans to a Grey Cup on home soil.  My prediction for this year (and yes I do feel somewhat dirty for saying it) is that the Eskimos will do the same thing as they beat Toronto at Commonwealth Stadium to win it all. When it comes to the /=S=/, I will admit it I am torn.

Going into training camp, I thought this team would be there with the Eskimos and Stampeders and I am still there.  I don't think they are good enough to finish first, but I do think they are good enough to finish second and welcome Calgary for the Western semi.  While I don't know if the Riders have made exponential improvement, I do think this is the year Calgary comes back to the rest of the pack.  My spidey senses tell me Bo Levi Mitchell is not 100 percent despite the claims that he is.

My spidey senses also tell me this Rider team shuffled the deck somewhat in the off-season, but they aren't marginally better.  The team played last season with no established quarterback and while it would seem as if this team is Zach Collaros', Chris Jones has not publicly handed him the keys.  The offensive line was a question mark last year and it remains so today.  What also concerns me is the amount of "new" on this team.  They have the second-least amount of returnees at 31.  Experienced teams ready to take a run at the Grey Cup shouldn't have the second-least amount of returnees.  I understand why veteran players were cut, but there is a lot of youth in that lineup---youth that will make mistakes which is something this football team can't afford as they look for a home playoff game.

At the end of the day, Chris Jones knows a LOT more about football than I do and he will have these guys ready. Can he get them to second place? I think he can.  Can he get them to the Grey Cup? I do not.  At least not as we get set to start.   We all know that predictions can change in a heartbeat and that most everything has to go right in order to win. I have them going 11-7.

--Randy Ambrosie was speaking with Rod Black and Duane Forde in the first half of the Eskimos-Bombers game before the first delay hit.. Ambrosie said a lot of the reason why the illegal contact challenge rule was taken away was because the fans hated it. He says he listened to those fans in his cross-country tour by removing that from the coaches.  Did no fan mention Rod because he is still there?  Did Randy not talk to TSN? I keed, I keed!!

--Mike Reilly's hat collection is solid! He should have been given the #1 player in the CFL honour in the TSN Top 50 just for that!

--Is Mike Hoffman's girlfriend Bryan Colangelo's daughter?  My jaw literally dropped as I read the cyberbullying story involving her and the wife of Erik Karlsson.  How on earth did Karlsson not take Hoffman to the woodshed? Was this why the Senators were the biggest disappointment in the NHL this past season?  I can't imagine what that dressing room must have been like.  This has movie written all over it.  It really is one of the more unbelievable stories I have read in a long time.  It also asks just how big of a greasefire is it in Ottawa.  This is more than Eugene Melnyk.

--The World Cup of Soccer got underway on Thursday with the host Russians beating Saudi Arabia 5-0 in a game that shows me Saudi Arabia won't be winning the world's biggest sporting event. The game after a lavish opening ceremonies that included a speech from Russian President Vladimir Putin.  I kept waiting for Alex Ovechkin to crash the party by walking into the stadium.

--Canada will be co-hosting the World Cup in 2026.  One would assume the Canadians will get a team in the 48 team field.  I don't care how many teams are in the 2022 event, Canada has to be there to show they belong.  John Herdman did great things with the women's program so here's hoping he can turn the men's program around.

--Congratulations to Adam Brooks.  The former Pats captain was on the Toronto Marlies team that won the Calder Cup as they took the AHL Championship with a seven-game win over the Texas Stars  It's a game where we see a professional hockey team from Toronto get awarded a championship trophy in colour.  It can happen----although I'd rather see it happen more for the Marlies than their other hockey team.

--Someone knows where the stolen Regina Riot jerseys are!  You can't really hide those and you can't really do anything with them.  If you know where they are, do the right thing and get them back to the team.  They can't afford to go out and get new ones and they shouldn't have to depend on "charity" and "goodwill" to get new ones.  Get the unis back to their rightful spot.  In the meantime, two thumbs up to the Regina Thunder for saying "use our jerseys and wear them with pride".  Nice work!

That's all I got.  Have a great week and enjoy the game.  I don't think we will be there until 2 AM.  Wouldn't that be delightful!  At least it would be a Friday night though. YEESH!


Words can't express how much I hate Jason Maas(hole)!

If you think Jones is bad, you've seen nothing when it comes to him.


I'd rather get wet than freeze my ass off!