And Then There Were Two

OK, how many of you at the start of the playoffs said the Chicago Blackhawks would play the Philadelphia Flyers in the finals? C'mon, raise your hands! I think a lot of us would have taken Chicago, but only hardcore Philly fans would have taken the Flyers. It will be the Hawks and the Flyers for all the marbles. Two of my favourite players (Toews and Richards)will get the chance to take the mug from Commissioner Bettman and live a life-long dream. Who ya got? I would have to think Chicago is heavily favoured, but in these playoffs, who knows!
That's the poll question this week, so answer away.
-----
I talked on the blog yesterday about how the NHL needs to get rid of the conference championship presentation if teams are going to make a mockery of it by not touching the trophy. That being said, I loved it when Mike Richards grabbed the Eastern Conference championship trophy and took it to the dressing room with him. Attaboy Mike.
-----
Here's your Cup final sked.... 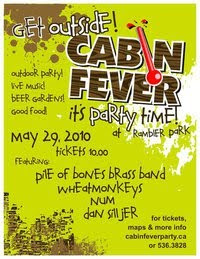 Having a concert out at Rambler Park. That will be a little different, but at the same time, what a great venue. It should be a good time. Here's hoping the rain stays away.
-----
You would think with the Habs having the run they did, there would have been someone who would have started the website habsgirls.com. I'm sure these two would have been more than happy to be a part of it..... 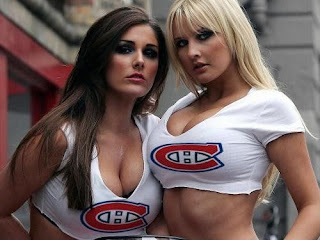 -----
With the World Cup of Soccer almost upon us, Argentina decided it needed an easy tuneup so they called on Canada. It was like the Thunder or the Rams playing a division 1 NCAA school. The final was predictably one sided as it ended 5-0. This game was played in Argentina, but why. Wouldn't it have been a big payday for the Canadian Soccer Association to have one of the world's biggest powers play on our soil? If we are going to get crushed, at least lets do it here.
----
Why is it when Rob Vanstone appears on Global Sports Mondays that he never extols the virtues of High Impact Wrestling. You would think that someone who is such an ardent supporter of the local crew would give a kind word to those that provide us with some much-needed yuks on a Friday night once a month. CMON ROB!!! Someone still needs to explain to me why Lee Jones look-a-like Jeff Tyler is the champ. This guy looks like he couldn't beat up a Grade 8, so why is he carrying the belt. Then again, its not Rex Roberts.
-----
Bret "The Hitman" Hart is the new GM of RAW! If he gets a couple of months experience, could he be Brent Parker's successor?!
----
Orlando beats Boston in the NBA East Final to avoid a sweep. After what happened with the Bruins, I wonder how many in Boston have a lump starting to form in their throat.
-----
I'm back in the Cage with Rod Pedersen at 4 o'clock this afternoon on 620 CKRM. By the way, there is a Facebook page dedicated to the show if you want to sign up. It sounds as if RP wants to preview the SC finals and that's fine with me. It sounds as if he is trying to line up people connected to both teams playing so we'll see if he can get confirmation.
-----
I'm thinkin and hopin this is going to be a good week. Lets see!
at 5/24/2010