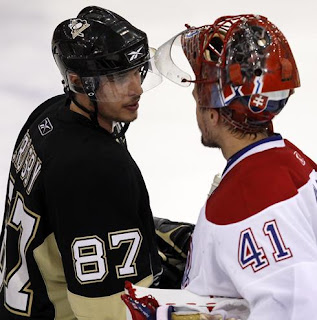 As the clock ticked down at the Mellon Arena at the last time, I thought of the old Batman TV show. I thought of Burgess Meredith after he had been captured by the dynamic duo waddling away going "Quack, Quack, Quack". Like the Penguins of today, this Penguin of yesterday knew he was done.
I don't know about you, but when Montreal scored in the first minute I thought it was their night. Marc-Andre Fleury did his best Game 7 Patrick Lalime imitation and it was game over. Yes, Pittsburgh did make it interesting, but when the big save was needed, Jaroslav Halak came through big-time.
While I thought Pittsburgh would win this game and this series, I'm not that overly disappointed that they didn't. I really had enough of Sidney Crosby bitching and crying during this matchup. To see him now go to the sidelines doesn't hurt me one bit. However, you know Gary Bettman will not sleep easy tonight.
Just some other thoughts after watching Game 7
--Who's tougher--Hal Gill or Sami Salo. For those that don't know, Gill took 50 stitches to the back of the leg to close a skate cut that happened during Game 5.
--Speaking of Salo, did anyone catch Garry Galley's veiled comments about Salo when talking about Gill. Galley said Gill knew he couldn't play despite taking the warmup in Gam3 6 so he put the team ahead of himself by declaring himself a no-go. Galley saying if you know you can't skate and you can't help your team, then why play. It was evident Tuesday night despite his courage that Salo was not skating at 100 percent. I think Galley was basically telling Salo that he should have taken the night off.
--I wonder if Carey Price thinks about what team he might be playing for next season
--How are Leaf fans reacting to this Montreal success
--Did you notice that Montreal capitalized on a "too many men" call to basically put the game away. Sorry Rider fans, I had to say it. It hurts me just as much as it hurts you.
--Elliotte Friedman is just too good. I have to wonder just how much longer it will be before he is swallowed up by an American network. Friedman is just as good a guy as he is a reporter as well.

From the Twitter account of my good friend (and former Warriors play-by-play man)Bryn Griffiths in Edmonton.
Looking at Don Cherry's jacket reminds me I have to go out and get some Crown Royal! HA HA HA HA

Lost in the shuffle of what the Habs are doing is what the Flyers are doing. Down 3-zip at one point, Philly has forced a one game winner take all game Friday in Boston. The Ontario League's Windsor Spitfires has already shown you can win a series in 7 after being down 3-0 as they did it during the playoffs this season. The way that series has gone, expect the unexpected.

When Shomari Williams signed with the Riders, he said the first thing he needed was a two bedroom apartment in Regina and could someone help him find one. Now that he has signed, he is still in need of a place. Who is going to help this man? I know Regina vacancy rates are low, but there must be something out there in a good part of town for him.

I said it during the World Juniors and I will say it again. Switzerland has become a force to deal with on the international hockey stage. Yes, I know it was a B and maybe a C team that the Swiss beat at the Worlds on Thursday, but a win is still a win and it was Switzerland's first over us in international mens play. By the way, Steve Stamkos got hurt in that game so I'm guessing its now a certainty that Jordan Eberle will play in Canada's next game which is Friday.

Will Mark Messier give Sid a call now that his season is done?

Some have said they could care less about the Worlds. Sorry, but if Canada is represented in a major hockey tournament like this, I will care. I don't care if our best players are not there. Our nation still is and I want success. Speaking of the Worlds, if they could hold that tournament in Quebec City and Halifax a few years ago, they could certainlty have it in Regina and Saskatoon. I hope that happens.

The gorgeous Elisha Cuthbert(a definite all-Mitch team member) is taking heat for looking a little "chunky" in her bikini while holidaying in Mexico. Ummmm....Elisha is still looking pretty good as far as this blogger is concerned. 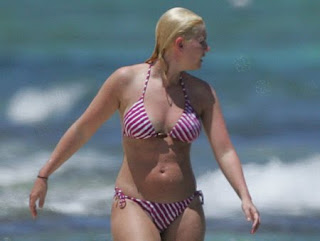 You will see on the right hand side of this blog that there is a link to Regina based Omni Studios. If Tim and his gang don't do it, you don't need it. From graphic design and brand development to web design and social marketing. One call does it all. If you are in need of a website, give him a call and tell him I sent you. If that doesn't get you at least two percent off your order, I don't know what will. You can also check out my Twitter feed if you're really bored.

Congrats to CBC's Bob McKeown for finding and then ambushing Graham James. I think I speak for many when I say we all would have applauded had you A) kicked that SOB right in the bag and B) pushed him into traffic.

That's all for me. Have a good Thursday. As you go into your day, I ask you this...

Mitch, I for one have been reading your blog since its inception, and let me tell you that it gets better and better, almost more interesting than Rod's. Keep up the great work!

I'd put Elisha on my first line with Nieuwendyk and Roberts. Theo would have to sit on the bench.

Go shave that pathetic playoff beard and sulk all summer Cindy. I lost a lot of respect for him during the playoffs. He scored the golden goal and he won't be forgotten for that, but for god sake just shut up and play.

I'd love to know what Crosby and Halak said to one another. Sid sure didn't sound gracious in his post-game interview. I think he said Montreal will be lucky to go any further than what they have. C'mon Sid. They've just beaten the two best teams in the East. Give credit where credit is due.

How much are the Riders helping Shomari when it comes to finding a place? Isn't Dominguez a realtor now. Can't he find a house for them?

I'd still do Elisha in a heartbeat! As long as Dion is far far away.

For a team that barely made the playoffs, these Habs are pulling some major major upsets. now if only they could stop rioting after every series...

Hey Little Johnny,
Why do I get the impression you're the only person on the planet who thinks that might be an option?

Elisha Cuthbert is nothing but Toronto garbage now. That being said, I would love to take out the trash. :)

Hey Anon, even I know I have no shot at Elisha. But a man can dream can't he?

First - as a die-hard Bruin fan, the Habs current success is killing me. The only question is when will Halak falter. The Habs seem to have all the luck concerning goalies - anybody remember Steve Penny? Good enough to stand on his head for a playoff season than vanished. Is Halak a flash-in-the-pan - only time well tell.

The Flyers are annoying me to no end. I used to be happy enough that the Bruins go out of the first round of the playoffs, but with the Habs waiting destiny is calling (Nuff' said). I predict a game seven victory based on the late goal scored by the Bruins in the third period (the monkey is finally off the back) plus they are playing at home (did I mention the Habs are waiting).

Totally agree with you concerning Elisha!!!