Let The 2nd Half Begin 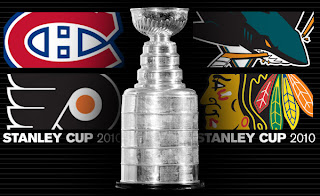 In the East, you have the number 8 seed Canadiens, who have already knocked off Washington and Pittsburgh, going up against a Philadelphia team that got here after being down 3-0 in games and 3-0 in Game 7 to beat the Bruins. Both of these teams are Cinderella stories. Montreal seemingly has the advantage here, but Philly doesn't quit. After going seven in their first two series, will fatigue play a role for the Canadiens? Many people will look at the key matchup being Halak vs Leighton. Montreal wins that one, but the matchup I think will be huge will be a battle of Mike's---Richards vs Camalleri. Richards has been Philly's best player and Camalleri has been Montreal's best skater. I will go with Montreal to make it three seven game victories in these playoffs.

In the West, its 1 vs 2 as San Jose takes on Chicago. The Sharks have gotten better as the playoffs go along. Joe Thornton started to get his game together and Joe Pavelski has played at a Conn Smythe Trophy level should they go all the way. As for the Hawks, they looked great against Vancouver with the exception of Game 1. They are firing on all cylinders. I think Chicago's forward speed will be too much for San Jose's D. The Hawks beat Nashville and Vancouver in 6 and I can see them taking out the Sharks in 6.

Drop the puck!
-----
How about the Calgary Hitmen? They looked dead in the water against a good Moncton Wildcats team. It was 3-0 for Moncton at one point ,and they were controlling the play. Calgary fought back to make it 3-2, but when the Wildcats scored to make it 4-2, I thought it was over. Calgary didn't. They scored three times in the last 5 and a half minutes with the winner coming thanks to a bad bounce as they take it 5-4. It means the pressure is on tomorrow as Moncton plays Brandon with both teams at 0-1. It should make for a great game. The same goes Monday when Calgary takes on Windsor.
-----
We're now less than three weeks from Rider training camp getting started. Are you ready?
----
at 5/15/2010

You took Colorado and Detroit to beat SJ, and it didn't happen. Now you are taking Chicago. If you want SJ out, take them!! HA HA