I Love These Playoffs 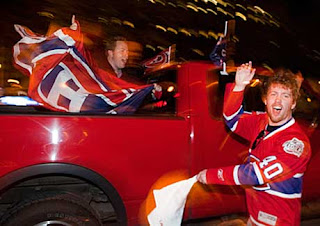 How can you not love the Stanley Cup playoffs this year? Just when you think a team might be out of it, they come back. No one has any idea how this thing will end up, and that's a great thing. It shows that at least Gary Bettman has done one good thing for the NHL, and that is get the salary cap in the game. (Do you see what I mean Bud Selig?)
Montreal is inexplicably taking Pittsburgh to Game 7 after defeating Washington in the first round. The Habs somehow rallied the troops on home ice and beat the Penguins to set up a deciding game in Pittsburgh on Wednesday. Jack Todd had a great write-up in the Leader-Post on Monday regarding the team and its fans. I couldn't agree more with what Todd says. They are certainly capturing everyone's attention, and if for some reason they should pull it out on Wednesday, never say never. I heard someone say after the game that this run is starting to look like the Oilers run a few years ago with the number 8 seeded team knocking off the heavyweights en route to the Cup final. We know what happened then. If Marc-Andre Bergeron injures Jaro Halak the way he did Dwayne Roloson that year, you can start the X-Files music.
-----
Are Bruin fans getting that dry throat and an overall sinking sensation. Boston had a chance to sweep the Flyers out, but they lost Game 4 and now they have lost Game 5 meaning the Flyers can go home and force a one game winner take all matchup. Boston wasn't supposed to lose on the 40th anniversary of Bobby Orr's Stanley Cup winner, but they did. It wouldn't surprise me to see Philly win this thing now just like it wouldn't have surprised me to see Detroit beat San Jose in 7 had the Wings won Game 5 the other night.
-----
It looks as if Ryan Smyth's pain will be Jordan Eberle's gain. "Captain Canada" has had to leave the World Hockey Championships after suffering a broken ankle. Rules stipulate you can't add another player until after this round is over. It means that after Canada's game with Switzerland to close out pool play on Wednesday. However, coach Craig MacTavish has indicated that he will insert Jordan into the lineup after that as the Canadians go for gold.
-----
Some like the Rider licence plate idea(like me), but others don't saying its just another cash grab that they don't want to be a part of. OK, I understand that. A blog reader who did not want his comments published asked me why the Riders can't take the money from this venture and put it straight into the new stadium fund. Who says they aren't going to? All monies from this will go to the football club. If they decide that they should take the cash from this and put it into the stadium fund, I have no problem with it. I would also like to see SGI take this one step farther and get some more provincial pride going. I would like to see plates that you can order with the logos of our two universities and WHL teams on them. Have that money funnelled right to the teams as well. With no disrespect to the Riders, I would like to see that idea instead of the one unveiled yesterday. The Riders have more money than they know what to do with right now, but tell me the Cougars or Huskies wouldn't love some additional money from an outside source. Tell me Moose Jaw people wouldn't snap up a Warriors plate or Prince Albert people a Raider plate. It would be great! I preached that idea on one of the CJME shows one night, and a lot of you were in favour of it. I say why not? Of course, most everyone will buy a Rider plate so maybe now the idea to incorporate other teams just won't work. Oh well!
------
Has anyone been ticketed by police for talking on their cellphone while behind the wheel yet?
-----
The Pats are looking for billet families next year. Call their office at 522-PATS if you want to open your home to what could be a future NHL star.
-----
Would Jason Ripplinger, the current director of scouting for the Vancouver Giants, be a good choice as the new GM of the Pats. You can't discount what he has done over the past couple of years. If it wasn't for the fact that his brother is Todd, I would whole-heartedly endorse him. The Pats with two "Rippers" high up in the organization just might be too much. Somewhere, Greg Mayer reads this and nods his head in agreement. Just to play it safe, you do know I am kidding with my mean-spirited remarks to Todd. He's a good man!
-----
The Associated Press is re-voting for the NFL defensive rookie of the year after Houston linebacker Brian Cushing was found guilty of using steroids and suspended for the first four games of this year. Why is this being done? When Barry Bonds finally comes out and admits he has been gobbling roids, will we take a re-vote on his awards. There was no problem when Shawne Merriman was awarded the defensive player of the year a few years ago only to be suspended for steroid abuse, so why is there a problem now. Hypocrisy lives boys and girls.
-----
Have a good Tuesday and try and stay away from Habs fans that you know. They could be a little unbearable today.
at 5/10/2010

Hey Mitch, I like your idea about SGI allowing other teams to have those 'affinity ' plates. I would like to get one except ICBC here of the left coast probably wouldn't go for Rider plates !

I love the licence plate idea too. I would gladly drive around Stoon with a Huskies plate on. I put enough money into the Riders, but this would be a way to give back to the almamater.

Being a Rams alumni, I would gladly get a Rams licence plate. I love that idea. The Riders don't need the additional cash, but the minor football and hockey teams would snap it up in a second.
The Brian Cushing deal is an absolute joke.
If Montreal beats Pittsburgh and gets to the Cup final I may have to take a holiday to someplace where no one talks hockey.

SGI is following what is already being done in Ontario. Ontario plates can come with Leaf, Jays, Raptors, and I think TFC logos.

I would love to see SGI expand this to have university logos (as I am a proud grad of the U of R), WHL , and even SJHL logos.

And yes I am considering getting one of those Rider license plates. HEck why don't we change the motto on all the license plates from Land of Living Skies to Pride lives Here.