Are You Kidding Me?

The Brandon Wheat Kings have not looked that great at this year's Memorial Cup. They were beaten rather handily by Windsor in the tournament opener and Calgary gave them a solid beating in the final game of the round-robin. It doesn't matter. The Wheat Kings are one game away from hoisting the trophy after rallying to beat Calgary in the semi-final. Brandon was down 2-0, but they came back to tie it and take the lead only to see the WHL champs send it into OT. Jay Fehr then sent those at Westman Place home happy as Brandon takes it 5-4 meaning they will play Windsor Sunday night at 6 for all the marbles. I hope its not a repeat of the round-robin game. I don't think it will be.
-----
Is Dustin Byfuglien making a late run at the Conn Smythe Trophy? He could be. Byfuglien's goal in overtime gives Chicago a 3-2 win over the Sharks and a 3-0 series lead. That series could end Sunday afternoon. The Habs and Flyers meet this afternoon in Montreal. A Habs win and its a best of three. A Flyers win and we are one step closer to a Chicago-Philly final.
----
Interesting statement from Caps owner Ted Leonsis. In a story on Sportsnet.ca, Ted Leonsis told the National Press Club on Friday that he's getting a firsthand look at the NHL-NBA differences as he prepares to take over as majority owner of the Washington Wizards. I'm surprised because now I see all of the NBA financials," Leonsis said. "And I'd honestly have to say at this point in time that the NHL is stronger than the NBA, clearly because it has a CBA in place that protect owners from taking stupid pills.
"There is a hard cap in the NHL. In the NBA, you can spend a lot of money and every dollar you're over this luxury tax you get fined. And there's a lot of basketball teams who are losing a lot of money."
The NBA is expected to push for changes in its flexible salary cap structure when its collective bargaining agreement expires after next season, and a lockout is possible if the players' union doesn't agree.
Leonsis has already been through that scenario, overspending for Jaromir Jagr and other players not long after buying the Capitals in 1999. After the NHL lockout in 2004-05, Leonsis rebuilt his team through the draft under a new CBA with a hard salary cap.Leonsis plans the same approach with the Wizards, once the NBA approves his purchase of the team from the estate of the late Abe Pollin. It starts with the No. 1 overall pick in the draft, which the franchise won earlier this week in the NBA lottery.
-----
A question for those of you that have satellite radios? If you listen to the Scott Van Pelt show, is it just me or does he have a lot of NHL chatter on his show. This past week, I heard Barry Melrose, Dustin Byfuglien, Joe Pavelski and a member of the Flyers who I can't remember at this time. I don't hear FOX Sports Radio ever interview NHL guys. Having the NHL on ESPN Radio is huge.
-----
What exactly were GSP and Georges Laraque doing on "Off the Record"? The point of that was.......
-----
So lemme get this straight, Rod had Brendan Taman, John Chick and Todd Reesing on Friday's edition of "The Sportscage". John Lynch co-hosted with him. He must have wanted that show to go on for four hours. It sounds to me as if Reesing is on his way here and that Chick will only be coming here for a visit.
-----
The Jays hit six homers and lose? WOW!
-----
This will be the last item under this blog for the day with the exception of telling everyone to have a good weekend. I say that because if you're squeamish, stop reading now because of the picture you will see. It is of a Spanish bullfighter who was gored yesterday in Spain. This picture is quite graphic so beware. It is one helluva picture though.... 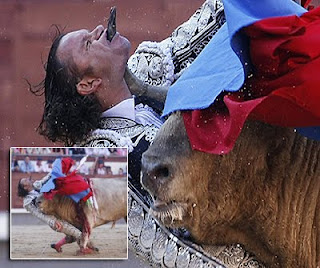 I'm not going to show you the video. Believe it or not, this guy is recovering in a Madrid hospital and is expected to be alright.

While extremely gross, that might be one of the best pictures I have ever seen. That's gonna leave a mark!

Byfuglien has been big, but the Conn Smythe will go to either Toews or Kane. I would put my money on Towes.

Brandon gets lucky in one game and because of that they get a chance to go to the finals and win. That's brutal! Its why I hate the host team format--especially when there are only four teams. Something like the RBC or the Telus Cup where there are 5 or 6 teams means you have to play well to get to the final whether you are the host team or not. Most times the host team fails unless they are a league champ.

Mitch
Great job on Roddy's show and on your blog here. Im the Flyers fan that sat with ya for a bit in the lounge at the Cooperators Center during the womens championship. Who would have thunk this eh. Anyways GO FLYERS GO! Jason