Computer withdrawal is over. Its time to start blogging again. As I said, a pesky modem problem kept me from going online for about 24 hours. One forgets how much one needs the internet when he does it daily to check things like e-mail, bank accounts, news, etc, etc, etc. Anyhoo, things are running smoothly so here goes. 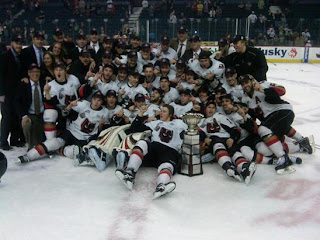 Congrats to the Calgary Hitmen. They outclassed Tri-Cities to win the Ed Chynoweth Cup in 5 games. It won't surprise me one bit to see the Hitmen playing Windsor in the Memorial Cup final.
----
Regina's hockey community is abuzz over the fact Brent Parker indeed did take the fall for this season's failure by removing himself from the GM chair. Two early candidates for Parker's replacement have sprung up. One is former Warriors GM Chad Lang, the other is current coach Curtis Hunt. No disrespect to either Lang or Hunt, but hiring one of those two men will only make it appear as if Parker has hired a "puppet". An emotional Parker said that would not be the case when he announced he was stepping down. Hiring one of those two men to the position would not be the best thing to do. Here's a real shot in the dark as to a replacement-----Mike Sillinger!
As for Brent, I can't help but admit that I do feel sorry for him. Brent has done everything he possibly could to bring a winning hockey team to Regina, a team that Regina could be proud of, a team that Regina hasn't seen on a consistent basis since the early to mid 80's. Brent succeeded in making the Pats a hot ticket in Regina, but he couldn't succeed in the on-ice product. He is very passionate in his love for this team and he wanted to be the guy. The emotion he showed Friday afternoon was not fake. A winning team won't happen with him as GM. It makes me wonder just how much he will be at the Brandt Centre next winter, and it makes me wonder if his passion for the team will boil over the way its been known to when he was the GM.
-----
It looks as if we know who the NHL's final four will be. It would appear as if Pittsburgh will play Boston in the East final with the Sharks and Hawks meeting in the West final. Pittsburgh came to within a game of knocking off the pesky Canadiens on Saturday night while San Jose knocked off Detroit to move on. I don't know about you, but I think a Chicago-San Jose West final could be a Stanley Cup in itself.
-----
Now that the Sharks are in the West final, does the criticism of that team end or not? You can no longer argue that San Jose is not getting the job done.
-----
-----
While I am an Oilers fan, I am hoping deep down that the NHL returns to Winnipeg. Those people love their hockey and they would love to get their old team back home. I know of a few people who love the Jets and would be ecstatic to see them return. Wouldn't it be great to see them return, get up 3-1 on the Oil in a best of 7 and lose in 7.
---
Have you been downtown? If you do, look at the Twin Towers. The Riders 100th anniversary banner is starting to go up on the Towers.
----
Kimbo Slice showed that he just can't cut it in UFC. Kimbo was taken apart by Matt Mitrione at UFC 113 and was promptly cut by UFC prez Dana White. In the main event, Mauricio "Shogun" Rua took the light heavyweight belt with a first round KO over Lyoto Machida. Did you see the potato under Machida's eye when it was over? WOW! By the way, Kimbo wasn't the only UFC guy cut when things were said and done. White also told Paul Daley to hit the road after he hit Josh Koscheck with a sucker punch well after the final bell had rung. It was obvious frustration on Daley's part, especially when Koscheck tried to sucker the judges into taking a point away from him when he faked an eye injury in the first round. How about Koscheck's post-fight interview. Nothing like angering the Montreal fans by saying A)The Penguins will kick the Canadiens ass and that B) He will kick GSP's ass.
------
Nothing like a statement from Henry Burris to get CFL fans in the West riled up. Burris saying its sure nice for Edmonton to host a Grey Cup for his Stampeders. I think there are many west of Winnipeg that will dispute that statement. Gotta love Hank for stirring it up though.
-----
Make sure you get a hold of Mom today!
----
at 5/08/2010

Nice to see the Red Wings are going home. SJ will have to get to the Cup final before the "Choke" moniker is lifted.

The Oilers are lucky there was no "video replay" when they used to "take liberties" against the Jets. How many of us remember the late John Ferguson bashing the cage of the Edmonton goal judge when he made that "phantom" goal call? That would have been the price of admission to see Fergie lay a whooping on that individual.

Just think how different the Memorial Cup would be IF the Warriors had knocked off the Hitmen? Wow!!

Burris is an idiot.

Mike is right. How would the WHL playoffs have changed if MJ had beaten Calgary.

There is no way Sillinger wants to get involved with the Pats as long as Parker still has his hands on it. I think Mike would make a great GM, but I would be shocked if he does it with Parker looking down on him.

Maybe it is time that Sillinger and the other former NHL Pats buy the team, like the Kamloops and Tri-City's players have done. The team needs a new "Culture" and I think Sillinger and the boys could change the team's fortunes

Wow, I've never heard that suggested before! We should get right on that!