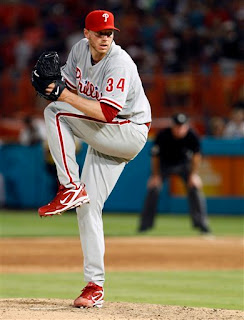 On a night where one Philadelphia sports team was vying for the sports spotlight, another took it over in a big hurry. On a night where the Stanley Cup finals started, former Blue Jay Roy Halladay is stealing the headlines, and for good reason.
"Doc" pitched the 20th perfect game in major league history and the second this month as the Phillies beat Florida 1-0. Considered to be the best pitcher in the game today by many, this has to cement his legacy which was already pretty strong. Whether or not Halladay pitches in and wins a World Series is yet to be seen, but adding this to his already impressive resume should get him into Cooperstown just a little quicker I would think.
I'm guessing even Blue Jays fans are saluting Halladay's accomplishment. While some are bitter that he left, most Toronto baseball fans understand the reason he did and gave them their blessing. Its too bad he won't be able to go back to Toronto like he was supposed to because you know Jays fans would have given him a huge ovation---especially after this.
That being said, I must admit Toronto isn't missing Halladay as much as I thought they would. Shawn Marcum has taken over with some Halladay like performances and as a result, the Jays are still in the race two months into the season. They are only five and a half games back of Tampa in the East. If I were GM Alex Anthopoulos, I'd be taking a look at my roster and how to upgrade it.
-----
I don't know about you, but I LOVED Game 1 of the Stanley Cup finals. Yes, the goaltending sucked, but it was good old fashioned hockey. Up and down the ice, no trap, no crap. I was thoroughly entertained by the opener that saw 11 goals go in with the Hawks getting six of them. Both teams will need better goaltending, and it will be interesting to see if Peter Laviolette goes back to Michael Leighton for Game 2 or if he gives the reins back to Brian Boucher. If you're Chicago, you have to go we won this game without Patrick Kane or Jonathan Toews doing their thing, we won it with guys like Troy Brouwer, Dave Bolland and Kris Versteeg doing their thing and then some. That is very encouraging if you are a Hawks fan.
------
I had someone tell me that it won't take Chad Lang long to start making his mark on the Regina Pats seeing he watched them a lot last year. I was told to expect trades and a lot of them soon. That's all and good, but who is Lang going to deal and for what? You're not going to trade Carter Ashton, Jordan Weal, Garrett Mitchell, Brandon Davidson and Myles Bell. You have a good Euro in Hampus Gustaffson. What's left? There aren't many marketable players on that roster that you can trade. Chad has his work cut out for him if he is in fact ready to start doing some dealing.
-------
I gotta wonder if all the players that have come to the various Saskatchewan places from the US for the Western Major Baseball League are asking themselves if the sun shines on the Canadian prairies. The forecast is calling for sun and highs in the mid 20's next weekend. I hope so!
----
The Lakers and the Celtics in the NBA finals. Will Robert Parish and Michael Cooper make an appearance?
-----
I now own a Blackberry! GULP! Are they as addictive as everyone says. I guess I'll find out very soon.
----
Have a dry Sunday!
at 5/29/2010

Congrats to Halladay. Wish we could have seen it somehow.

I think Lang could trade one of our goalies and get something of worth back. I would probably let Guhle go since Ketlo has a years experience as a stater.

Leighton looked like the bright lights of the finals got to him. Niemi looked rough too, but he shook off a bad start. The best player on the ice was Hartnell. It was fun to watch. Hopefully more of that is in store, but I'm guessing both coaches will be preaching defence today and tomorrow.

I now own a Blackberry! GULP! Are they as addictive as everyone says. I guess I'll find out very soon.