An Embarassing Gaffe For The NHL

Stats have proven in the past that a team that wins Game 1 of a playoff series usually goes on to win said series. If that holds true, we will see Chicago and Philly play for the Stanley Cup. The Flyers looked dominant in Game 1 of their series as they hammered Montreal 5-0 while in San Jose, the Sharks were beaten 2-1 by Chicago in a game that has to leave the league and the home team as red-faced as can be.


With the net empty, the Sharks were looking for the game-tying goal when Devin Setoguchi was tripped by Dave Bolland as he came across the line. A penalty was called. Here's the moment right before the trip.... 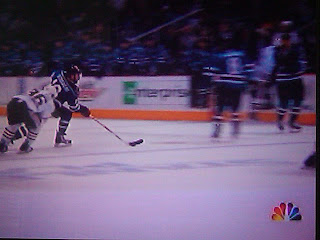 You can clearly see it is Bolland committing the penalty. What happened next is something that simply just can't happen in Game 1 of a conference final. As play resumed, number 36 was on the ice. In fact, Bolland just about had a chance to ice the game by putting a puck in the empty net. With Bolland on the ice, Kris Versteeg sat in the penalty box. Bolland is a much better penalty killer than Versteeg---in fact, he might be Chicago's best guy on the PK. How could this guy be on the ice? How could the officials not notice this? Worse yet, how could no one from San Jose see what was going on?
Hockey Night in Canada reported that NHL officiating supervisor Terry Gregson said the refs in question told the Hawks the wrong guy was in the penalty box, but Chicago never made the change. Should the striped shirts not be demanding that change be made? Should they not be making sure that Bolland makes his way across the ice into the penalty box?Again, should the Sharks not be protesting this? I really don't know who gets more blame here. The league and the Sharks are both at fault. Chicago rolled the dice and they won. They may have gotten the short end of the stick when it comes to officiating having not received a power-play opportunity in Game 1. We'll never know if San Jose would have scored with Bolland in the penalty box instead of Versteeg, but the league needs to acknowledge their mistake and the Sharks should be wiping the egg of their face as they were had.
-----
As for the Flyers, they looked like the dominant team in Game 1 of their series, but as we have learned before in these playoffs, one game does not make a series. Isn't that right Vancouver? Certainly on this night though, they had it altogether. Michael Leighton isn't reminding anyone of Bernie Parent, but for a team that is constantly looking for number one goaltending, Leighton is giving it to them now after they lost Brian Boucher for the season in the Boston series.
------
I said it last week, I'll say it again. If the Flyers are going to put Kate Smith on their video screen for God Bless America, the Habs need to counter with Roger Doucet singing O'Canada.
----
After getting their ass handed to them by Windsor in the Mem Cup opener, Brandon needed a win against a Moncton team that had one stolen from them and they got it. The Wheat Kings blitzed the Wildcats 5-0 meaning they will get to at least a tie-breaker game. Seeing the host team's performance Sunday only magnifies the question "Why did Kelly McCrimmon start Andrew Hayes against Windsor?" Should be a great one Monday when Calgary meets Windsor. I say that is who we see in the final. Speaking of the final, it will now be a night game and not an afternoon matchup. Good on Sportsnet for bringing that to us in prime time instead of the middle of the day.
------
How many quality goalies are going to be with new teams next year. Carey Price, Tim Thomas, Josh Harding, Marty Turco, Cristobal Huet, etc. etc. Methinks the goaltenders union is going to see a lot of shifting over the next few months.
------
Did Boston's failure against Philly show something that needs definite improvement going into next year. If it did, do the Bruins find the guy or guys they need by trading down in the draft.
----
I'm starting to wonder if Canada is going to come home with a medal from the Worlds. They didn't look very good against Sweden on Sunday. Then again, it wasn't an elimination game.
-----
What's the latest on the CFL "lockout"?
----
If Chicago gets to the Stanley Cup and loses, will someone have to put Marian Hossa on "suicide watch". For those that may have forgotten, Hossa could be the first player to get to three Cup finals in consecutive years with different teams and lose.
----
I gotta admit that the Blue Jays are a fun team to watch. Cito Gaston has gotten the best out of this team. Who would have thunk that!
-----
The Cubs game on WGN Sunday was done with play-by-play guys Len Kasper and Bob Brenly sitting with the fans in the bleachers. COOL!!! That would be a fun day behind the mic.
----
Whatever happened to Sammy Sosa?
---
The Mrs. came home from my oldest daughters ball practice and said they were almost eaten alive by mosquitoes. I was in the house watching the Flyers-Habs game so I don't know. Please tell me Regina that this isn't going to be a good year when it comes to mosquitoes.
-----
I came upstairs during the Montreal-Philly game to see the Miss USA pageant on. US figure skater Jonny Weir was a judge. I can't really explain his creepiness. There simply is no word to describe it.
-----
I don't care who won Survivor. That show is what spawned the crap that is known as reality TV. As I have said many times before, sports is the ultimate reality TV.
-----
I get the feeling this will be a great Monday. A great one indeed.
at 5/16/2010

Mitch:
You might be reading too much into the Bolland thing. Yes, it was a bad mistake and yes, the league should be very apologetic to the Sharks, but I don't think that's a series-changer.

MB - Brandon hasn't clinched anything yet. A BWK loss to Calgary and a MON win over Windsor would have both teams at 1-2. There would then be a tiebreaker between the teams - despite Brandon's round robin win over Moncton yesterday.

I stand corrected. Thanks Chris!

Why would Boston trade down in the draft? What they lacked was a goal scorer & one of the two guys they're going to get at #2 is going to be better than some 30+ year old whose best years are behind him. Maybe Boston should trade #2 and their other first round pick to Edmonton for #1?