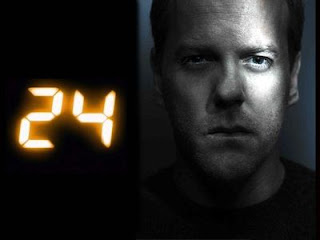 I have loved "24" ever since it went on the air, and no Elisha Cuthbert's presence in Season 1 had nothing to do with it. I've never been as addicted to non-related sports show as I have been with this one. The small screen adventures of Jack Bauer end tonight as the final season comes to a close with a 2 hour season finale. Its one that I hear is very dramatic as Jack ties up all the loose ends from yet another hectic day in his life. Kiefer Sutherland spoke with Entertainment Weekly about the show and its legacy...

ENTERTAINMENT WEEKLY: Back in 2001, did you have reservations about debuting the show after Sept. 11?
KIEFER SUTHERLAND: Huge, massive concerns. It was something that was really transcendent to the population, and it wasn’t about the show. I think we all went through a period for three weeks, that if you weren’t a doctor, a policeman, a fireman, or a nurse, and you weren’t able to actually physically help, you just felt moronic for what you were doing. And me being a professional actor for a living, I think we felt the dumbest of all. So it wasn’t about the appropriateness of the show. But at some point, something’s got to jolt you out of the unbelievable mourning of a situation like that, and the sadness of that kind of day, and movies and television and music and literature are all things that do that.

Is Jack Bauer an anti-hero?
I think so, because my perception of a hero is someone who is victorious at the end of the day, and I don’t think Jack was ever that. From season one, he managed to save his daughter and the incumbent president but he lost his wife, and there has always been something to pay for Jack Bauer. I think one of the reasons the audience has gravitated to this character is because there is a reality in that. 24 worked really well in that gray area.

How did you originally feel about the plan to kill off Jack’s wife, Teri, in the first season finale?
Negatively! I thought it was going to be the biggest mistake of all time. How on earth can you have an audience stay with you for 24 episodes, and then do this to them? It was one of those classic things of underestimating what an audience can handle. It doesn’t change the fact that people sent in thousands of letters and emails, and tens of thousands, all of which started off with, ‘I hate you guys for doing this,’ but at the end of the letter, they somehow managed to work themselves back through to ‘I also love you for it.’

The show was often criticized for relying on tropes like moles in CTU, or someone — or some thing — destroying CTU.
If I was going to do a show about Wall Street, would people be like, ‘Why is there another financial crisis?’ Take a look at the number of people who have been arrested for spying either on a technological level or on personal levels all around the world. It happens. It’s in the world where the show lives. And that’s what the show is.

Talk about the way the show cracked the zeitgeist.
One of the interesting things, and I’ve always taken it as some kind of compliment, is that people forgot that it is a TV show, but talked about it politically as if it happened. It didn’t. A lot of things we were doing to create drama and circumstances were misunderstood.

What about the show’s past depiction of Muslims?
In the second season, we worked with the Muslim community, and I know we did a PSA. But, if you want to just take a look at 9/11, they were Muslims. Deal with it. It’s a fact, and Muslim extremists exist, and we have also done Christian right extremists, and we have also done political, Eastern block terrorists, and those who had financial and religious motives — all kinds. We weren’t going to pretend that the 22 hijackers in 9/11 weren’t Muslim. By the same token, I do believe you have a responsibility to say that this is a show about extremes. And I think you have to do whatever you can to make sure that people understand that this is not a commentary on what you believe people of the Muslim faith are doing. There’s a very, very small group, and so we did everything we could to do that, while protecting the right to tell the story that we wanted to tell.

Jack Bauer became an icon. How did that make you feel?
It’s a double-edged sword. You love the fact that people are enjoying your show, and then there’s the water-cooler discussion in which people start to manufacture what this meant, and what that meant. I think that on some levels, people read a little more [in the show] than was intended.

What were your favorite season finales?
Certainly the first one, just because it set a precedent for us for the rest of the show. I can’t remember the season, but there was one where Jack Bauer gets in the truck, the day is over, and he’s on his way home. Jack comes unglued. And it was the one moment where we got to show that all of the stress, all of the pressure, and all of the terrible things that happened in that 24-hour period do have an amazing, profound effect on this guy.

Your favorite villain?
Nina Myers [Sarah Clarke] was fantastic as a villain because we had gone through half of the first season thinking we were going to be partners. And then the writers turned that around on us! That was certainly an education for me as an actor. I think Nina was the first character I ever saw a T-shirt about. She had betrayed Jack so badly and they had an intimate relationship before that! I always loved that character.

What about tonight’s series ender?
What’s interesting is how it almost goes back to year one, where it’s not about saving the planet. It’s not about a nuclear bomb. It’s not about any of these things. It becomes about two characters. It was much more moving than I had ever anticipated, and for the people that I know who have seen it, I think they felt the same way.

Does it feel good knowing that you don’t have to say goodbye to Jack Bauer because of the 24 film?
It’s a huge relief for me. To go out on what we believe is a very strong high note was really important to us, and we still get to go make this film that we’ve wanted to do for a long time.