The 2018 Viterra Provincial Scotties begins Tuesday afternoon at the Northern Lights Palace in Melfort with a good mix of old and new in the nine-team field as Saskatchewan determines what rink will represent them at the 2018 Canadian women’s curling championship known as the Scotties Tournament of Hearts in Penticton BC.

Leading the way is Penny Barker.  The Moose Jaw rink comes in as the defending provincial champ.  After winning the title in Melville last year, Barker struggled at the 2017 Scotties winning just once.
Barker is not the only former provincial champ in the field.  Also taking part are four-time champ Stefanie Lawton who last represented Saskatchewan in 2015, four-time champ Sherry Anderson of Saskatoon who won her first title back in 1994 , and two-time champ Amber Holland of Regina who won the Scotties in 2011 and ended up winning silver at the worlds.

Others in the field are Regina’s Chantelle Eberle and Ashley Howard, Candace Chisholm of Carlyle, Robyn Silvernagle of North Battleford and Nancy Martin of Saskatoon.  Three members of Martin’s team are in Melfort, but the skip is not.  Martin is taking part in the Canadian Mixed Doubles Olympic curling trials in Portage La Prairie, Manitoba as she is teaming with Catlin Schneider.  Taking her spot is Taryn Holtby. 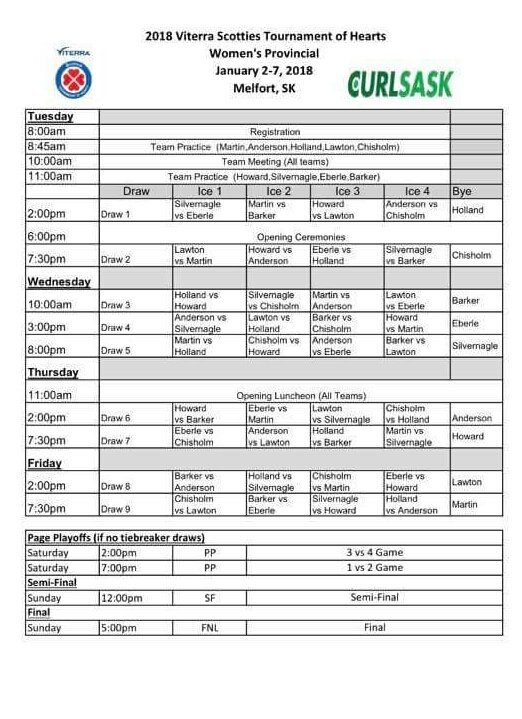