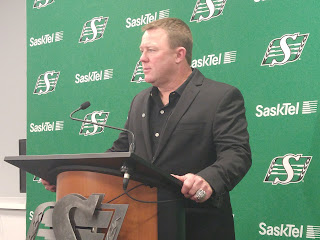 Riders head coach and general manager Chris Jones appeared on 620 CKRM's Sportscage Wednesday afternoon to talk about the trade for Zach Collaros.  The following is a synopsis of what was said.

Q:  How much better are you at the quarterback position now that you have Zach Collaros in the fold?

JONES:  Well, he's a very good player that we have known for a very long time. He's been in this league for a long time, and I've known about him for a long time, even before he was in the CFL.  He's a fine football player with a lot of the quarterback intangibles that you need.  He is tough, he is a leader, he is the first one in the door and the last one to leave. It was a no-brainer to us.

Q: His contract is an issue, but it sounds as if you will be able to renegotiate that deal. Do you anticipate any problems?

JONES: We've had conversations with both Zach and his agent, and it looks like things will run smoothly and we should have a new deal in place quite quickly.

Q: Is it your aim now that Zach is your quarterback for the next 4-5 years or longer?

JONES:  Like I told Zach, life is always a competition. We have an awfully good crew of quarterbacks. Brandon Bridge is on the cusp of being an every-down guy. We aren't handing him the number one job. There will be a competition and competition is a good thing.

Q: How did this come about?

JONES: This first came to my attention prior to the New Year. They called me and things started speeding up pretty quickly. I knew we had that extra pick in the second round so I started some digging and looked at his TD to intercption ratio and his win/loss ratio prior to him getting hurt in 2015. I have talked to length about him to guys like Tommy Condell and Scott Milanovich, and they both think he is a Grey Cup calibre quarterback and they love him.  Ultimately, that is what we want no matter who he is.

Q: Have you talked to Zach?

JONES: He's excited at getting started. He says he has never been in better shape and he wants a playbook a-s-a-p.  He's down in Mexico right now with his girlfriend so I told him to enjoy the trip and then come up to Regina and we will get you what you need and show you around. He knows Mac (Stephen McAdoo) as they were together in Toronto so I don't expect any problems with our offence and its terminology. I think it should be a seamless situation

Q: What is the future of Kevin Glenn?

JONES: I talked to KG today and told him we will take the next couple of days to evaluate before getting in touch with him.  We will do it the right way with Kevin.

Q: Where are you when it comes to a new QB coach?

JONES:  We have talked about a lot of people, but nothing has been finalized. . We have our receivers coach in place and I'll tell you what I feel very strongly about him.  His guys  blocks better than anyone in our league. Everywhere he's been, his guys block and that is something we need to be better at. We need our receivers to block better.  Now that we have that person in place, we will start focussing on finding a replacement for Jarious.

Jones also revealed defensive back Elie Bouka has been released so he can sign with the NFL's Philadelphia Eagles.

Thanks Scruff. So does Kevin Glenn sign for a day with Edmonton?