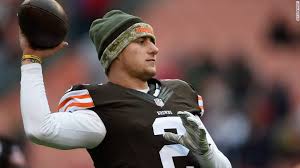 The Hamilton Tiger-Cats confirmed Sunday that they are attempting to negotiate a contract agreement with quarterback Johnny Manziel, The sides have not reached a deal, but per CFL rules, the Tiger-Cats will retain Manziel's rights after making a qualifying offer by a noon deadline.

In a statement, the Tiger-Cats wrote:

Manziel has not played since the Cleveland Browns released him in March 2016. He posted three photos to his Instagram account early Sunday morning, his first since May. He used an emoji of the Canadian flag in a comment under one of the photos.


Here he comes!! Get ready Canada!