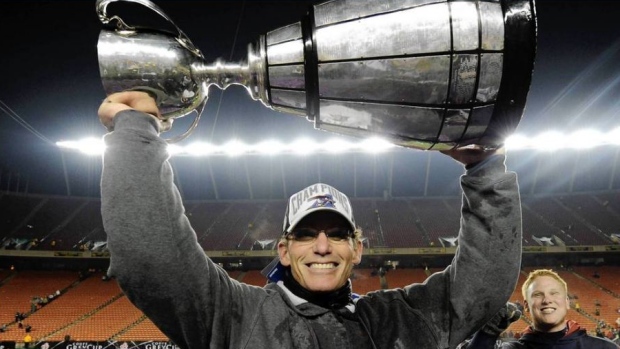 -- All it took was one text from a listener on Friday to get the ball rolling, and was it ever on the weekend as the debate was on. Rank the CFL head coaches as they stand now.  A gentleman asked 620 CKRM Rider analyst Luc Mullinder to do so on "Sportscage" and Luc gladly obliged.

Now that isn't the way I would rank them, and I am sure your list would differ too. What shocked me in all of this is that Luc put Mike Sherman who has ZERO coaching experience in the CFL ahead of the three head coaches in the West that got through the playoffs in the West.

I would automatically place Sherman at the bottom of the list because you can't give him a grade yet. You don't know what he has to work with, you don't know what his coaching staff will look like. Yes, he has a solid resume, but means nothing when it comes to the Canadian game.  Trestman managed to do it and June Jones looks like he can.  If Sherman can pull the Alouettes out of their slide, it will enhance the CFL's profile south of the border, but if he doesn't make through a season or only lasts one season, it will hurt the league when it comes to attracting guys with football knowledge from south of the border.

One other question, how do you put Dave Dickenson so low.  Yes. he has inherited that team from John Hufnagel, but they have still produced-----until Grey Cup Sunday that is.

--I was told on the weekend Ambrosie's main reason for moving the season up is not for the comfort of fans, but $$$.  While I don't know if this is the case or not, I was told Ambrosie basically has a deal with the NFL Network to have games shown south of the border.  It would A) give the league more eyes south of the border when there is no football and B) give the NFL more of a foothold in Canada as all eyes in Canada would be on the game for the second half of the season. Does the NFL really need more of a footprint in Canada?

If this happens, how much money will it generate for the CFL? Will it lead to higher salaries for the players? With a new CBA having to be negotiated, you know the CFLPA will want a significant increase in the salary cap----one that I think they deserve to have.  It will be interesting to see if this is indeed the case.

-- The debate was well underway before the snow started to fly in Buffalo on Friday afternoon.  Had the World Juniors been tainted because of the outdoor game between Canada and the U-S. The answer to that was yes, when the IIHF allowed the pools to be tweaked so that these two teams would be in the same one.  Under IIHF rules, the gold and silver medallist from the tournament the year before are to head up the respective pools meaning Canada and the U-S should never have been playing in the first place.

The snow didn't help. It made a mess of what was a very important game. It gave the tournament an "individual" feel as if everything was centred around one game----one game that isn't the final! It was mentioned the conditions were the same for both teams so no one team had an advantage....that is a fair point.  I just don't know why you would have a game like this played when there is so much on the line.  The NHL would never have a Stanley Cup game played outdoors.  At the end of the day. USA Hockey and the IIHF sacrificed the tournament's credibility for the almighty dollar.  Some will also argue they put the players in jeopardy with this move.  I'm not buying that argument because you could say the same for any outdoor game that has been played in the past.  I'm just hoping what we saw Friday was a one and done type thing.

--After a year where it seemed the Canadian NHL teams had their act together, one starts to wonder how many Canadian teams we will see vying for the Stanley Cup this year.  After going to Game 7 of the Eastern final, the Senators aren't going to make it,  Edmonton and Calgary don't look to have the horses to get in. Vancouver is still in its rebuild and Montreal is a mess.  That leaves Toronto and Winnipeg at this time as carrying Canada's hopes.  Should that be a concern?

--Is Blair Walsh still employed by the Seahawks? What a fitting way for their season to end on Sunday. The only thing that would have made his missed 45 yard field goal at the end of the game giving Arizona a win would have been had Atlanta lost.  Walsh missed 3 field goals from under 40 yards in a three point loss to Washington, he missed a field goal against Jacksonville which was costly and he was short on a field goal in a Monday night loss to Atlanta that would have switched the scenarios around in Sunday's season finale.

There are many things wrong with the Seahawks.  Despite the fact they have no offensive line and no running game and despite the fact they had several members of their defence hurt, they were still in a position going into the final quarter of Sunday's season finale to be a playoff team. A major fix is needed and the window is closing, but getting a new kicker has to be one of the top things for Pete Carroll to do in the off-season.  Carroll mouthing the words "unbelievable" after Walsh's latest miss was all you needed to know.

--While Walsh's miss was symbolic of the Seahawks season, how about Cleveland's Corey Coleman dropping a 4th down pass at the Pittsburgh 20 with his team down by 4 in the final minute of regulation. That drop cinched an 0-16 season for Cleveland.  YUCK!

--Jon Gruden is heading back to the Raiders. What a drawing card for the organization as they get ready to head to Vegas.  I am guessing while not coaching, he hasn't lost anything for the game as he is still around it every week with his Monday Night Football responsibilities.  I'm looking forward to seeing what "Chucky" can do. As for ESPN, they have a huge hole to fill.  Here's one suggestion for a replacement----Peyton Manning! Perhaps he can do what Tony Romo has done at CBS.

--Congrats to the Regina Pat Canadians for winning the Macs Midget Tournament.

--Raise your hand if you are sick of Alexa calling Tracey's mobile after saying it is negative 8 outside!

--You won't find a much better football game than the Rose Bowl. That game had it all!

--It will actually be nice to go outside and not have the air hurt your face.  Did it really hit -56 with the windchill in Val Marie on Saturday morning. That's a little too cold!

You're right Scruff, Sherman shouldn't even be on that list, it should be an eight man list for now.
Then you have to realize that Luc sees everything through green glasses. How can he rate Chris Jones as second when it's taken him two years to move the Roughriders from 5th in the west to 4th?
If Chris Jones was coaching any other team Luc would have him just ahead of Jason Maas and that would probably be more realistic.


Not really sure how you can have Sherman in the middle of the pack ahead of guys like O'Shea and Maas, but OK.

There is no doubt Trestman is number 1 though.


When people tell me how boring American football in, I will just plug in a tape of the Oklahoma-Georgia game. Was going to go the Pats game, but I couldn't turn the TV off. Solid entertainment!

What a game!!!
I was glad to see that overtime in the NCAA is basically the same as the CFL and not like the NFL joke.
Who was first? Did the CFL fashion their overtime rules after the NCAA or was it visa versa?

What a game!!!
I was glad to see that overtime in the NCAA is basically the same as the CFL and not like the NFL joke.
Who was first? Did the CFL fashion their overtime rules after the NCAA or was it visa versa?


The season is going to move up a month, but I think fans will see the quality of play will suffer tremendously and call for it to move back. The NFL isn't changing its draft for the CFL. Canadian players who can crack an NFL team won't be signing with CFL teams as we have seen in the past. Where do you draft them then?

It will look bad for the league if the top 3 players taken aren't in a training camp! Look at the Manitoba kid in New Orleans right now. He would have been a top 3 player overall in the CFL draft, but teams knew he was headed south so he didn't go until the 5th round with the Riders taking him.

If Ambrosie is doing this more for the $ than what fans think they want, he needs to look again. This could be his first bad decision. The CFL has survived decades with a June-November season. Don't change it for $$$

I'm sure Ambrosie really cares about your opinion on the CFL Schedule Scruffy. He's no fool whether the schedule stays the same or is moved up, he knows you'll tune in the NFL once they start televising pre-season game. You talk a good game about the CFL but you're just another wannabe.

Move up the CFL season and we'll have training camps while all the prospective rookies are still in university.
Leave it as is or shorten the season on the back end. In a 9-team-league a 16-game-season makes more sense anyway.

Right. One home game and one away game per team.


Did Luc go out without a toque last week?


The NCAA formed their overtime first

That NCAA and CFL overtime makes a lot more sense than what they do in the mighty NFL.


O'Shea and Maas coached teams that were 2nd and 3rd in the West, but they are the bottom two? That makes no sense and I am a Riders fan!

When the Riders are involved nothing Luc says makes sense and I'm a Rider fan.