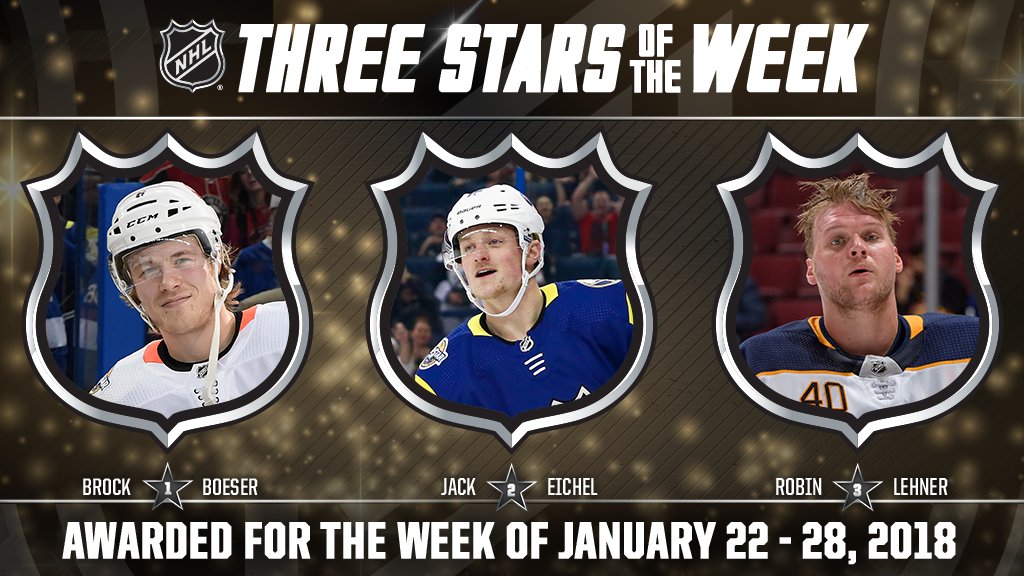 FIRST STAR - BROCK BOESER, RW, VANCOUVER CANUCKS
Boeser earned MVP honors at Sunday's 2018 Honda NHL All-Star Game, won Saturday's Honda NHL Accuracy Shooting competition and also scored two goals in two contests earlier in the week with the Canucks (19-24-6, 44 points). Participating as the only rookie in the weekend festivities at AMALIE Arena, Boeser recorded the winning goal in the Pacific Division's 5-2 semifinal victory against the Central Division and added 1-1-2 in a 5-2 triumph over the Atlantic Division in the final. He became the second rookie to win NHL All-Star Game MVP honors, following Pittsburgh's Mario Lemieux in 1985. Prior to that, Boeser won Saturday's Honda NHL Accuracy Shooting competition and $25,000 by hitting all five targets in 11.136 seconds. Earlier in the week, he scored two goals in Vancouver's 6-2 victory against the Los Angeles Kings Jan. 23 before being held off the scoresheet in a 4-0 loss to the Buffalo Sabres Jan. 25. The 20-year-old Burnsville, Minn., native leads all rookies and shares seventh overall with 24 goals in 46 games this season (24-19-43).

SECOND STAR - JACK EICHEL, C, BUFFALO SABRES
Eichel led the NHL with 2-3-5 in three outings to power the Sabres (14-26-9, 37 points) to a perfect week. He scored his third career overtime goal in a 2-1 triumph over the Calgary Flames Jan. 22. Eichel then posted 1-3-4, his third career four-point performance, in a 5-0 win against the Edmonton Oilers Jan. 23 before being held without a point in a 4 0 victory over the Vancouver Canucks Jan. 25. The 21-year-old North Chelmsford, Mass., native - who added 1-2-3 (2 GP) Sunday in his NHL All-Star Game debut - paces Buffalo with 20-29-49 through 49 contests this season. He is the fourth player in Sabres history to reach the 20-goal milestone in each of his first three seasons, joining Gilbert Perreault, Richard Martin and Thomas Vanek.

THIRD STAR - ROBIN LEHNER, G, BUFFALO SABRES
Lehner registered shutouts in each of his two appearances, stopping all 63 shots he faced to help the Sabres complete their first three-game winning streak since Feb. 14-18, 2017 (3-0-0). He made 33 saves in earning his seventh career shutout in a 5-0 victory over the Edmonton Oilers Jan. 23. Lehner then denied all 30 shots against in a 4-0 win over the Vancouver Canucks Jan. 25. In doing so, he became the first Buffalo goaltender to post consecutive shutouts since Feb. 29 - March 1, 2012 (Ryan Miller). The 26-year-old Gothenburg, Sweden, native owns an 11-18-6 record with a 2.87 goals-against average, .912 save percentage and three shutouts in 37 outings this season.
at 1/29/2018