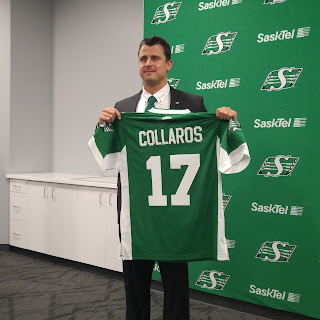 Zach Collaros was all smiles as he officially met the media for the first time since the trade earlier this month that brought him to the Saskatchewan Roughriders.  If Collaros has his way, that smile will continue.

"I feel like a new kid at school" Collaros told reporters at Mosaic Stadium Tuesday afternoon. “I’m really looking forward to this opportunity and focusing on the present. There’s not a better place to be.”

The 29 year old comes in looking to regain the form he had in 2015 when he was arguably the CFL's most outstanding player until his season ended prematurely when he suffered a knee injury. That injury sent his career in Hamilton spiralling to the point where he lost his starter's job to Jeremiah Masoli midway through the season leading to the off-season trade.

Collaros is of the belief he can regain that form of 2015.

Physically I’m there,” Collaros stated. “Things didn’t go the way I had planned or we as a team in Hamilton had planned the last two years, but from a physical standpoint I feel the exact same and I’m really looking forward to going out there and proving myself again.”

Collaros added he isn't coming into training camp feeling as if he is the starting quarterback and that he will have to earn the job over Brandon Bridge, Vernon Adams Junior, Marquise Williams and David Watford.

Like many athletes or people in general, Collaros doesn't like to lose and he made that clear on Tuesday.

Another issue brought up at his introductory news conference was his salary which head coach and general manager Chris Jones stated would be renegotiated when the trade was announced last week.  All Collaros would say on that is that it seems as if everything is going well.

Collaros will wear 17 in Saskatchewan. He says the number holds no significance as he has been a different number at every football stop he has made.  With Collaros taking 17, Crezdon Butler will now become number 5.


Physically he is there, but is he mentally? That's the reason he is no longer a TiCat.


Why did Butler change his number?

Still a gamble but a lot more realistic than the 'meet the media' conference a year ago for #8. That was an embarrassing farce.