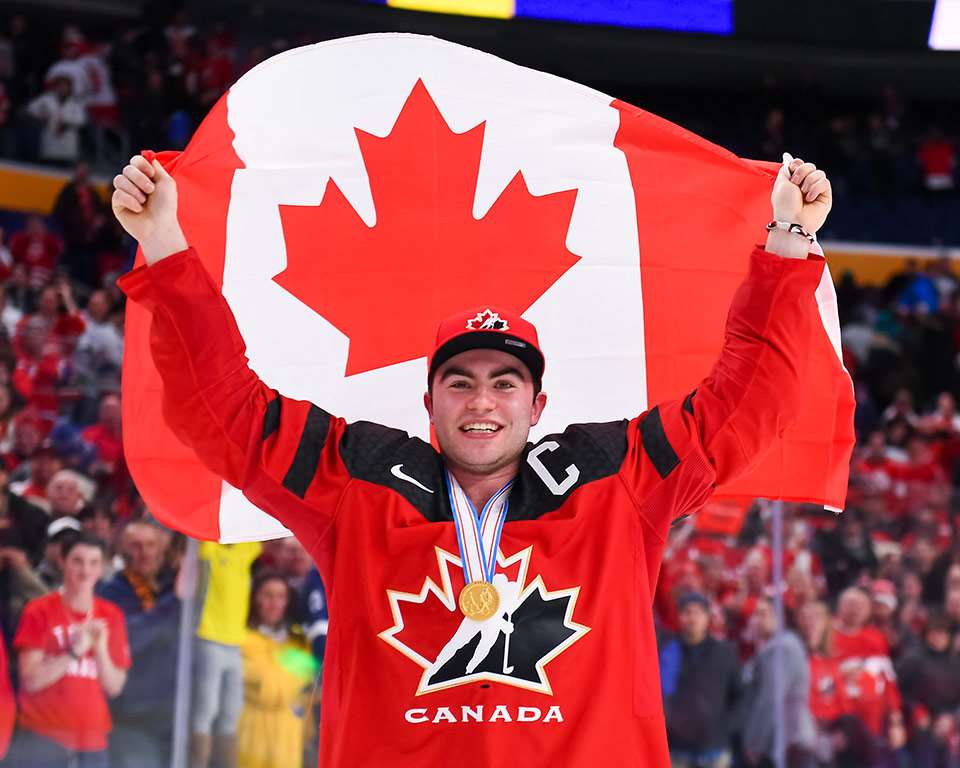 
Tyler Steenbergen scored the go-ahead goal with 1:40 remaining in the third as the Canadians bested Sweden, 3-1, to win the World Juniors title a year after dramatically falling to the U.S. in the shootout of the 2017 finals. It’s the country’s first World Juniors championship since 2015.

"We were trying not to dwell on last year," said forward Dillon Dube, one of the seven players who returned from the 2017 tournament. "This year, it was a new team, new group. We had a new mindset going into it. We got the job done."

Steenbergen, one of the least used players on the Canada roster, redirected a bullet point shot from defenseman Conor Timmins for his first goal of the tournament. The go-ahead tally from the unlikely hero sent the Canada-heavy crowd of 17,544 into a frenzy.

Alex Formenton sealed the game with an empty-net goal with one minute and 14 seconds remaining.

Sweden, which hasn't won the World Juniors since 2012, earned its third silver medal in the past six years. The Swedish captain, Lias Andersson, threw his medal over the glass and to a fan donning a Rochester Americans jersey. Andersson got the medal back, but he said he wasn't happy that he did.
"There was one guy in the stands who wanted it more than me, so I decided to give it to him," Andersson said. "He deserved it. ... I have a silver medal from the U18 Worlds and I haven't checked it in two years."

It is the 17th gold for Canada at the World Juniors.

For Pats forward Sam Steel, he finished the tournament with nine points which was second on team scoring.

USA forward Casey Mittlestadt, who is a Buffalo Sabres prospect, was named the tournament MVP.


Great hockey game. Back and forth all night. Just the way you would want it to be. Glad it didn't go to a shootout. That would have been awful no matter the result.

When does Steel get back to Regina? The ovation he will get at the BC upon his return will be thunderous!

Talk about being a sore loser. That kid was their captain? That ain't captain-like character to me. Wonder what the Rangers are thinking this morning!

Nice job doing the Cage while Roddy was gone. It's always better when he is hosting as we get more "inside" stuff from the Riders, but he was sounding pretty whiny about being back yesterday.

See ya at the rink!


When the WHL's leading goal-scorer is the 13th forward, you could see the depth this team had.

Outstanding effort! Anyone else notice there were a lot of WHL kids on that team as well as an NCAA player who played in the Alberta Junior league. When you want success, look no further than the WHL!


Can't help but wonder how Mahura feels this morning after being so close to having a gold medal around his neck. Know it won't happen, but can you imagine if Hockey Canada gave him a gold since he helped get the team to where it is by being in the pre-tournament games.

Will Steel play tomorrow against PA? Guessing he is heading home for a few days like Mahura did, but whenever he does get back, it will be a huge ovation for him.


You can’t demand to see passion and emotion from athletes and then be disgusted when you see it in its rawest form. Because that’s what hating to lose and not accepting anything other than victory looks like.