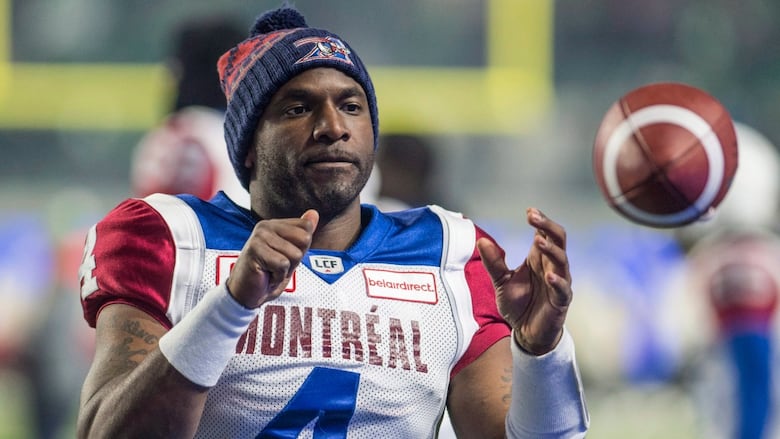 To the surprise of nobody, it appears the Alouettes have presented quarterback Darian Durant and his agent with a take-it-or-leave-it ultimatum. Now it becomes a question of which side will blink first.

General manager Kavis Reed went to great expense a year ago to acquire the veteran from Saskatchewan, trading two draft picks — including what would become the 10th overall pick this May — and then signed Durant to a three-year, $1.25-million contract.

But Durant and the Als struggled last season. Montreal went 3-15 and missed the Canadian Football League playoffs a third straight year. Durant passed for 3,233 yards and 15 touchdowns, but was intercepted 16 times and was benched on several occasions.

Durant, 35, is due a reported off-season bonus of $150,000 this Monday. It would be frivolous on both Reed’s and the Als’ behalf to pay that money should he no longer fit into the organization’s plans. Or if the new coaching staff — head coach Mike Sherman and offensive co-ordinator Khari Jones — believes Durant is only a backup at this stage of his career.

Durant, therefore, appears to have two options — have his contract restructured or be released.

Sherman wouldn’t commit to Durant, or anyone else, being the starter when he was named on Dec. 20.

“We’ve been in contact with Darian’s representative. We’re looking at his situation. We understand very fully that some of Darian’s (problems) have not been Darian’s alone. A number of other things dictated some of the struggles that he had. We’re in conversations with his representative about his future in Montreal,” Reed told the Montreal Gazette by telephone Wednesday from Banff, where he’s attending league meetings.

If the Als have Durant and his agent, Dan Vertlieb, backed into a corner, the same potentially can be said about the team, which has little in the way of depth or experience at the position.

Matthew Shiltz is entering his second season with Montreal. Other than starting the regular-season finale at Hamilton, Shiltz played sparingly, completing 35 of 61 passes for 385 yards and one touchdown. He was intercepted four times. Antonio Pipkin, another rookie, relieved Shiltz against the Tiger-Cats, completing two of nine passes. Drew Willy, another veteran, is eligible to become a free agent next month but could return.

In other words, it could be potentially dangerous for the Als to release Durant. And if he requests his release, Durant and Vertlieb will be banking on the belief CFL teams realize the value of an experienced backup. Only Calgary and Saskatchewan, arguably, can remain competitive should their starting pivot get injured.

“That’s the reason for looking at Josh Freeman. He’s at that sweet spot for quarterbacks when they potentially figure it out,” Reed said. “He’s a person that has something to prove.”

Kevin Glenn, who spent 2016 with Montreal but was recently released by Saskatchewan, remains another potential option. Reed said he and the coaching staff haven’t discussed Glenn’s availability, although Jones and Glenn have worked together.

And then, of course, there’s Johnny Manziel.

Manziel, the former Cleveland Brown, is on the Ticats’ negotiation list. Hamilton recently offered him a contract, meaning it retains his rights for another year. But Manziel’s agent, Erik Burkhardt, claimed the offer wasn’t satisfactory, while giving him permission to discuss potential trade options with at least one other CFL team.

That team is believed to be the Als for many obvious reasons, including the fact Manziel redshirted at Texas A&M in 2011 under Sherman. The Als, with the CFL’s oldest roster, don’t have much the Ticats might covet in a deal. But Montreal, by virtue of the league’s worst record, holds the first overall pick in May’s Canadian college draft.

Reed refused comment other than pointing out the obvious — Manziel and Sherman have a brief history together.

Instead, at this point, Reed believes improved play on the part of the Als’ defence and special teams would put less emphasis on any quarterback to try and single-handedly win games. New defensive co-ordinator Kahlil Carter told the Montreal Gazette last week the defence must be rebuilt, but claimed he would be able to entice free agents to work with him.

“Let’s look at us having a top three defence,” Reed said. “We have enough pieces offensively to be able to be very competitive. Let’s improve our special teams play. Have an opportunity to win two phases and have our quarterback develop by managing the game.”

am I having Déjà vu?


Isn't it ironic, dont'cha think. A little too ironic...yeah I really do think!


Not a Jones fan, but he was 100 percent right on this move. Darian is done! Don't spoil what was a great career by bouncing around. Retire and take the accolades.