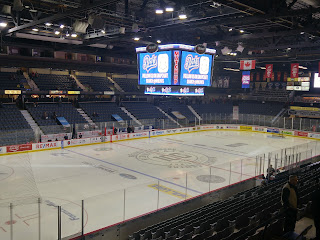 Queen City Sports and Entertainment Group (QCSEG), in conjunction with the Regina Pats Hockey Club and the Western Hockey League, have announced that two outdoor hockey games planned for Mosaic Stadium at the team’s upcoming Homecoming Weekend event have been moved indoors to the Brandt Centre.

The All-Star Celebrity Classic will go forward with up to 50 NHL greats, including legendary Hall of Famers, on February 17.  The game will be an interactive experience for fans, players and coaches.  The game will also feature a fun-filled skills competition with fans in attendance able to skate in the Brandt Centre post-game.
Homecoming Weekend will still be a great weekend for hockey fans in Regina,” said Pats Governor Anthony Marquart. “The inaugural Regina Pats Community Foundation Gala Dinner on the February 16, Rogers Hometown Hockey and Waskimo Warm up to Winter Festival are an exciting opportunity to showcase Regina over the Family Day Weekend!  We thank everyone for their support and we look forward to a weekend which will be enjoyed by all.”

“Ticket sales went well early but plateaued in the last couple weeks,” added Marquart. “Weather concerns and the quality of the ice for our players are also a consideration for moving this exciting weekend inside.”
People who have already purchased tickets for Homecoming Weekend will have the first opportunity to secure tickets for both the All-Star Celebrity Classic and the Pats/Warriors game on February 18th which will go on sale Saturday morning at 10 a.m. More details will be released tomorrow.

Season ticket holders and previous Outdoor Weekend Package purchasers will be receiving information in their email on how to secure their seats for the All-Star Celebrity Classic and will receive their regular season tickets for the Pats and Warriors game on February 18 at no additional cost. The club will be celebrating their alumni on the 18 as a part of the 100th Anniversary Season with a number of in-game presentations planned.


HA HA HA! Nice job Regina! Winnipeg, Calgary and Edmonton can do games and Saskatoon could probably do one too, but you can't. Did you think tickets should be 30 bucks or something!

Has an outdoor game ever been moved back inside before the day of the game? What a black eye for the Pats!

Funny they announced it the day of the collaros trade so it would get burried.


At the prices they were charging, does this surprise anyone?


So 40,000 people can sit in the snow in Buffalo and pay what I'm sure were inflated prices for a World Junior game in minus 10 degree weather, and people can sit in NYC on New Year's Day and pay between 200-550 dollars US for an NHL outside game, but people in Regina can't/don't want to pay for an outdoor game here.

Take a bow Regina! You have officially cemented yourself as a TERRIBLE sports city and one that will only support the Riders. Take a bow!

If it is true Brandt gave its employees 2 tix each as a Christmas present, how are they going to get fans back inside the Brandt Center? There ain't enough room unless you can sit on someone's knee!

Absolute humiliating black eye for Regina. And of course us season ticket holders will receive info via email at some point (because they really don't know the details yet, just making it up as they fly by seat of their pants) What a disgusting mess this has turned out to be.

regina people aren't dumb lol, there is no reason to sit out in minus 50 degree weather for a hockey game lol minus 50 is possible for mid February. To the people laughing at REGINA GET A LIFE!

Debacle, find it funny there are no comments allowed on this story on Pedersen's blog.


Cancel the Eagles concert too! It is May. It could rain that night and I wouldn't want any wussy Reginan to get wet. Good work Regina!


QCSE should have told fans buy a ticket to the games and get a free case of beer. It would have been a sell-out! After all, the hicks in this town that bitch and moan wouldn't pass up a free case.