The debate can officially begin now. I had heard from people within the Rider organization earlier this month that both Todd Reesing and Ryan Dinwiddie would be at training camp meaning it would give fans something to chew on. If early indication is anything, the debate will go on for a while.

Who is Darian Durant's backup going into camp? Who will Ken Miller slot at #2 on the depth chart? You have Cole Bergquist who was here for most of last season and learned the offence. You have highly touted college quarterback Todd Reesing who impressed at Kansas. You have relative unknown Kent Smith who has drawn high praise from the coaching staff and you have Ryan Dinwiddie who has CFL experience from his time in Winnipeg.

Personally, I would go with Dinwiddie. I know a lot of Rider fans aren't impressed with the Boise State product, but he is experienced and should Darian Durant go down, the dropoff won't be as large. It leaves Reesing and Bergquist fighting for number 3. If Reesing gets it, do you put Bergquist on the practice roster for another year. If its Bergquist, it allows Reesing a year to grow and a year to learn. By the way, it wouldn't surprise me if whoever is number 4 comes down with some sort of freak injury that will have him on the nine game list. Ken Miller has a hearty handshake and he "could" accidentally break a finger or something. (SARCASM ON) Gee, I hope that doesn't happen! (SARCASM OFF)
-----
I had a good chat with Darian Durant today for a story that will be on Riderville next week. (If you heard "The Sportscage" today, you heard that interview.)Ken Miller told me last week that Darian was more confident than he was last year and you could see that today. He is ready to go and he is ready to improve on his 2009---a 2009 that he called "mediocre". Mediocre!! You were the West's all-star quarterback, some felt you were the West MVP and you got your team to within a whisker of the Grey Cup in what was your first year as a starter. Talk about being your own biggest critic. I was expecting a big year from Darian already. After talking to him and seeing his demeanour, I think you will see a big year from number 4.
-----
I'm guessing Rider fans (and fans across the CFL) are breathing a huge sigh of relief knowing a new CBA has been tentatively agreed upon. Did you really think there was going to be a lockout? Both sides are way too smart to let that happen.
I just hope this new agreement doesn't mean less Canadians. I would not be happy with that.
-----
Have you heard about the golf round of a lifetime? Jamie Kureluk is a golf pro in Calgary. He was competing in the RBC Alberta Open Tuesday and shot a 61. That's 10 under par. What makes this round about one or two levels below sick is that Kureluk on the back nine shot a 25. A 25! He had seven birds and two eagles on the back nine. Beat that Tiger! Beat that anyone! 25!! That's absolutely insane!!!
-----
I'm guessing Boston sports fans are walking around with a great big lump in their throats. After seeing the Bruins choke a 3-0 lead and lose to the Flyers, the Boston Celtics are now facing a similar situation. After dominating a rather disinterested Orlando team for the first three games, the Magic have come back to win the next two. Game 6 is in Boston Friday. It can't happen twice in one year to the same city can it?
-----
I have now come to the conclusion that Don Cherry and TNT's Craig Sager go to the same place when it comes to gaudy sports jackets. Have you seen some of the stuff Sager is wearing. Looks nothing like Regina's GQ coverboy and host of Regina's most talked about sports show. Did you see RP's blog and the duds he had on yesterday? I howled when someone commented he looked like Horatio Kane only Horatio wouldn't wear pink. LOVE IT! That person should really identify himself (or herself) because that is a great, great line and a pretty good dig too.
-----
I did not see this, but a friend's wife told me Wednesday night she was watching the American Idol final when a TSN commercial came on advertising the new season and a Grey Cup rematch between the Alouettes and Stamps. WHO? Can this be confirmed? Did anyone else see this ad? If you did, what are you doing watching American Idol!! That will be demerits on your man card. It was bad enough when TSN promoted "Kevin" Durant and the Saskatchewan Roughriders during Grey Cup week last year, but this is just heinous and inexcusable.
----
After posting photos twice in the last month of Jennifer Aniston looking her best, a friend of mine has said I can not forget about my first ballot hall of famer Heather Locklear. He's right. Heather is turning 48 this year and she looks damn good too. Agree or disagree? 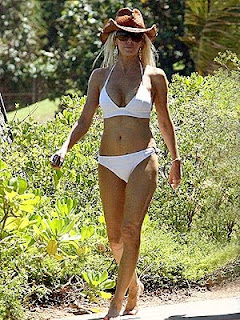 I saw the ad on tsn on Tuesday night during the lakers game. Pathetic.

Yes I saw that same TSN commercial. I thought I was hearing things when they said a rematch of last year's Grey Cup, but I guess not. Sorry, I admit it, I was watching American Idol with my wife.

25! I can't even get that on Tiger Woods golf on my PS3. You don't see 36-25 splits too often. Wish I could have seen that. Do you know if he was making long putts or was his short game just that good. WOW!

Heather Locklear is 48? I didn't even think she was 40! There's absolutely nothing wrong with her!

Dinwiddie does provide experience, but Bergquist was here for a year and he learned everything. It wouldn't surprise me if Reesing learns the playbook and doesn't turn out to be another good American QB that doesn't understand our game that it could be Durant, Bergquist and Reesing when camp breaks.

Didn't see the ad, but that is just a joke. First, Kevin Durant and now this. Who's the proofer over there, your buddy Morrison

To my knowledge Heather Locklear hasn't had the plastic surgery. She is way ahead of Jennifer Aniston. Debbie Gibson was on one of those "Whatever happened To" shows, and she looks great. She's not 40, but she is 39 and looks outstanding.

Honestly with Debbie Gibson I whatever age she is today she is always going to define "1987" for me.

Well, with all that attire, how are we to know??